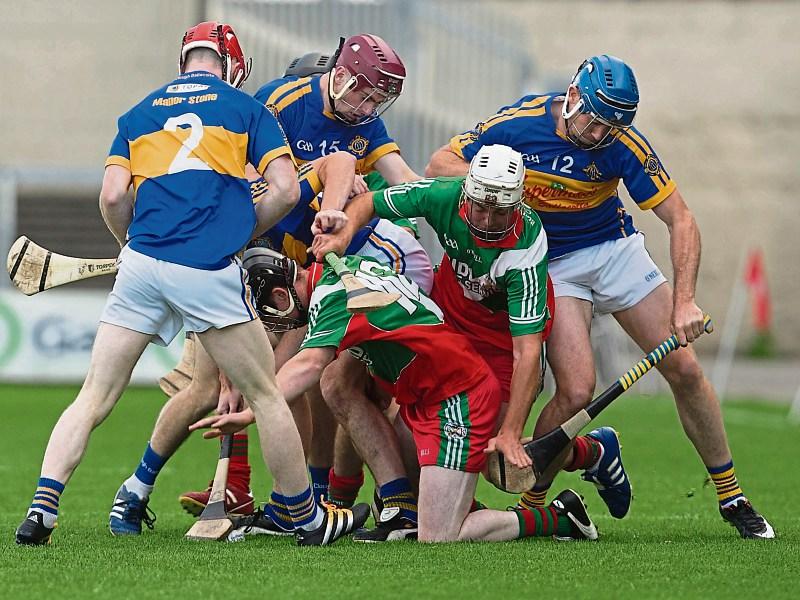 Both Rathdowney-Errill and Borris-Kilcotton dished out two hammerings last weekend, with both teams winning by a margin of twenty-one points however, Borris-Kilcotton's victory was the more impressive.

They were up against what most people thought to be a sterner test in the 2015 county champions Clough-Ballacolla, but they made light of that challenge, and made their way into the semi-finals of this year’s championship with consummate ease.

Clough-Ballacolla’s Willie Hyland kicked off proceedings in O’Moore Park, converting a close range free. Borris-Kilcotton shot back with the first of their five goals. Tom Delaney failed to control the incoming sliotar, and it fell into the grateful arms of Aaron Dunphy, who buried it into the top corner.

Clough-Ballacolla’s corner back Eoin Doyle’s chose the wrong option coming out of defence, and Aaron Dunphy snatched at the opportunity, making no mistake with his punishment of Clough-Ballacolla, with a deft finish into the bottom corner this time.

The score line even flattered Clough-Ballacolla at half-time, as despite going in ten points down, with Borris-Kilctton’s domainance all over the field, it could’ve been worse.

Borris-Kilcotton didn’t seem to lose any of their momentum coming out from the dressing room in the second half, as, just like the first, they began with a goal. Joe Campion’s shot was saved by Danny Hanlon, but Stephen Campion was on hand to tuck in the rebound. Clough-Ballacolla gave themselves a small lifeline, immediately responding with a goal.

Aidan Corby’s sent an inviting ball into full forward Willie Dunphy, who grasped and finished past Eoin Fleming. However, Clough-Ballacolla remained a long way off Borris-Kilcotton in terms of quality, and that showed throughout the rest of the half.

Points from PJ Scully and Aaron Dunphy were sandwiched between Dunphy’s hat-trick goal.

Clough-Ballacolla’s Ronan Broderick landed a 65’, but Aaron Dunphy responded for Borris-Kilcotton, as he brought his personal tally to 3-3 for the evening with only two thirds of the game played. Hyland pointed over a placed ball, but that was met with a PJ Scully free and a Joe Campion point.

The teams exchanged further points, but it was Borris-Kilcotton who, unsurprisingly, finished the stronger.

Midfielder Conor Kilbane landed a point, which was followed with substitutes William Whelan and Eoin Fitzpatrick combining to score 1-1 between them, the former with the goal.