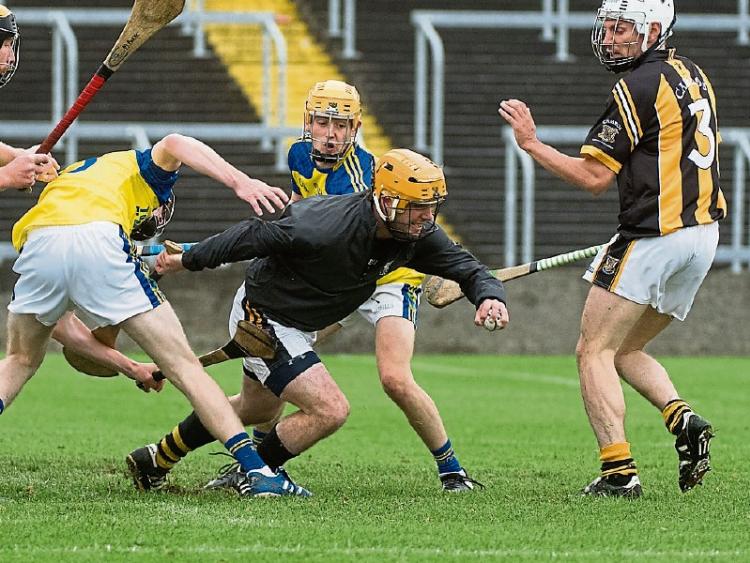 In the upset of the Championship thus far, this young Abbeyleix side stunned Camross with a late, late goal before holding on to claim their first Championship win over Camross since 1945 in a thrilling clash in O'Moore Park on Sunday evening.

It only ever takes a spark to ignite the Championship, and all in O’Moore Park on Sunday evening witnessed the first, and hopefully not the last, in this year’s Championship as Abbeyleix upset the odds to sneak past Camross in an exhilarating conclusion to the game.

The game was a mere fifteen seconds old when the first goal of the day arrived - Zane Keenan bore down on goal from the throw-in only to see initial shot blocked, but Mark Dowling was on hand to easily finish to the net for a dream start for Camross.

Abbeyleix didn’t panic and opened their own account just thirty seconds later with Ryan Peacock’s first of the day to set them underway. A brace of frees followed from Eoin Reilly, and already Abbeyleix were back on track.

Ciaran Collier and Ryan Peacock exchanged fire before Keenan edged Camross into a one point lead, but Abbeyleix quickly took the lead as points from Peacock and Reilly put the Fung in-front.

Both Abbeyleix and Camross had goal chances shortly after with neither lifting a green flag - although Camross would’ve had a certain goal had it not been for cat-like reflexes of Eoin Reilly to hook Ciaran Collier’s initial shot, before somehow picking himself up to get a block on Collier’s rebound.

Reilly and Keenan exchanged placed balls approaching the twenty minute mark before Abbeyleix rattled off the next three points through Ryan Peacock’s fourth of the half, a booming effort from Alan Lynch’s own half, and a Reilly free to give their side a four point cushion.

Camross looked to close out the half strongly with Darragh Duggan, Keenan and Andrew Collier all finding the target - as did Reilly and Jake Cranny to see Abbeyleix lead by three on a scoreline of 0-12 to 1-6 at the interval.

As ever, Camross went up the pitch and rattled off the next five points through, Dowling, Dean Delaney, Keenan, Dwane Palmer and Darren Gilmartin as they closed the gap to a single point.

Joe Bergin briefly interrupted the Camross scoring with a well-taken point, but Camross went back on the attack and slotted the next three points all through Keenan frees to see them retake the lead as the game entered the final ten minutes.

Two long-range Reilly frees either side of a Niall Holmes point ensured the sides remained inseparable with five minutes remaining.

With fifty-seven minutes on the clock Abbeyleix were awarded a free deep in their own half, and Enda Rowland’s monstrous puck was called upon. Rowland lofted a long ball into the opposition square which was steered into the net by first-half substitute Eoghan Fennelly in dramatic fashion.

Camross searched for a way back, and they rattled off two points in quick succession through Keenan and Ciaran Collier as the clock entered injury-time - but Abbeyleix stood firm and held out for a deserved one-point victory as supporters engulfed the pitch in celebration.