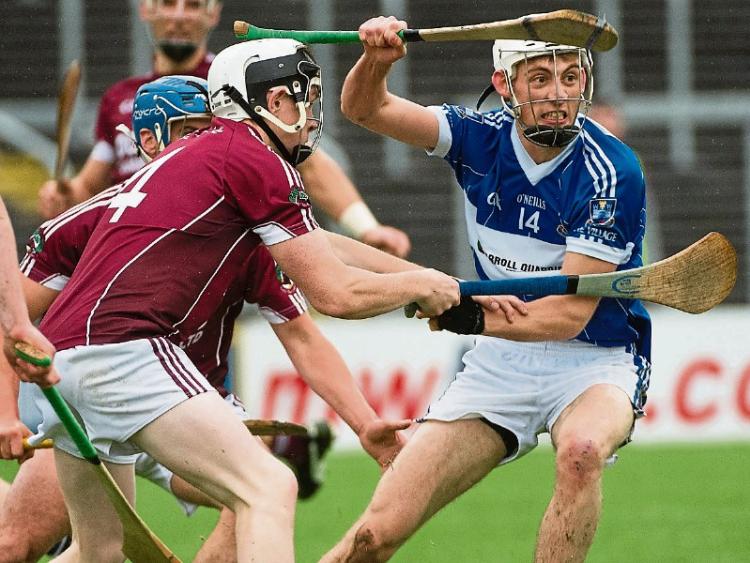 Ballinakill Gaels booked their place in the Laois SHC quarter-finals having withstood a late Castletown rally by the narrowest of margins in the first of the games on Sunday evening in O’Moore Park.

Five points clear heading into injury-time, Ballinakill Gaels looked like they were comfortably progressing to a Championship quarter-final - but Castletown’s relentless will saw them score 1-1 in the second and third minute of injury-time leaving Ballinakill clinging on at the death.

Castletown opened the scoring in O’Moore Park with three minutes on the clock when Martin Phelan and Ryan Mullaney combined to see the latter split the posts to set the scoring underway.

Ballinakill returned fire on the five minute mark with an Eamon Jackman free, but Castletown went straight back on the attack and were rewarded with a fantastic goal. James Hooban cleverly flicked the ball up and pulled low past Paul Simms for the first green flag of the day, while Shane Phelan and Gearoid Gaughan followed up with points to extend the Castletown lead to five points with fifteen minutes played.

Ballinakill Gaels came to life shortly after as they rattled off the next five points in a row through Jackman (3), Dan Bergin and Brian O’Mara to level the proceedings at 0-6 to 1-3 with twenty-three minutes on the clock.

Castletown retook the lead through James Hooban's first point of the day a minute later, and Dylan Conroy punished some sloppy play in the Ballinakill defence to put them two ahead with the first half drawing to a close - but Ballinakill Gaels rallied before the break.

Eamon Jackman drilled over his fifth and sixth points of the half in the final three minutes of the half, sandwiched my his midfield partner Seamus Dwyer’s first of the day, as Ballinakill entered the dressing rooms one point ahead on a scoreline of 0-9 to 1-5.

Castletown started the second half well with the first three points of the half in as many minutes through Martin Phelan, Ryan Mullaney and Dylan Conroy to edge them into the lead - but Ballinakill had other ideas as they replied with their first goal.

Cha Dwyer was initially denied by a fantastic save from Paddy Mullaney, but made no mistake with the rebound as he steered it past the men on the line to restore Ballinakill Gaels’ one point lead.

Points followed from Seamus Fitzpatrick and Cha to extend the Ballinakill lead to three, before Dan Bergin grabbed their second goal less than ten minutes after Cha’s first as Ballinakill began to take control.

Castletown came back with points from Dylan Conroy, Shane Phelan, Martin Phelan and James Hooban - but Ballinakill ensured they held a three point lead heading into the final ten minutes thanks to points from Jackman and Sean Downey.

Seamus Fitzpatrick increased the lead to six with a beautiful score from an acute angle, but Castletown fired the next two through Martin Phelan and Gearoid Gaughan to leave a goal separating the sides with five minutes to go.

Ballinakill Gaels looked to have done enough when Cha gave them a four point cushion, and Jackman pushed that lead to five with his eighth of the day a minute into injury-time.

But Castletown weren’t ready to accept their fate as Brendan Reddin spectacularly fired a goal into the top corner, followed by a point from substitute James Mullaney in the third minute of injury time - but that was to be as close as they’d come as Ballinakill Gaels held on by the minimum.