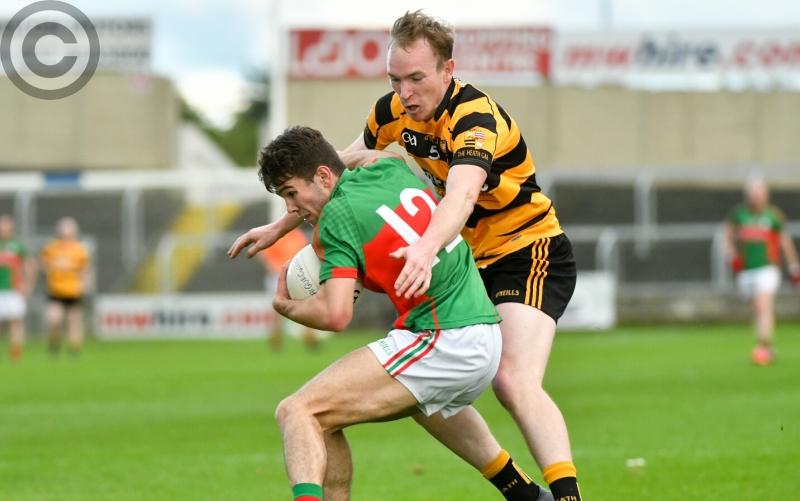 Graiguecullen are through to the quarter-finals of the Laois SFC after coming behind to beat The Heath in O'Moore Park on Friday night.

The Heath had been the better side for most of the game, as it took Graiguecullen until the 42nd minute to score from play. However, Graiguecullen dominated the closing 20 minutes of play, and they just about did enough to escape with a narrow win.

Much like The Heath's opening game against Stradbally, this one also got off to a slow start, with no score registered until the fifth minute. Graiguecullen had the best chance before that when Ross Hennessy was played through, but his shot rebounded off the post, and The heath cleared their lines.

Brian Ging eventually troubled an umpire when pointing well from 30 yards out, and it was another five minutes before Graiguecullen responded. Ian Fleming provided the score, as his free from the right wing clipped the inside of the post and dropped over.

That was Graigue's last score for 20 minutes, as The Heath's defence was superb for the remainder of the half. The repeatedly lead Graigue attackers down blind alleys or won the ball back with strong and well-timed tackling.

They re-took the lead when good passing from Eoin Delaney and Chris Bergin set up Daithi Carroll, and he made no mistake with a fine score. Carroll added another moments later, from a free this time, as The Heath made their superiority in the game tell.

Carroll was starting to come to the fore now, and he was almost through for a goal in the 20th minute. Denis Booth burst forward from centre-back and played him through on goal, but his left footed shot flew just over the bar.

The Heath were in on goal again eight minutes later, when sub Andrew Booth was set up on the right side of the penalty area, but his low shot was turned away by the outstretched boot of Ger Kieran. Eoin Delaney collected the rebound for The Heath and tapped it over the bar.

Graigue's scoring drought finally came to an end when Fleming pointed his second free, but Daithi Carroll responded in kind moments later to leave The Heath 0-6 to 0-2 in front at the interval.

Scores were scarce early in the second half, with Ross Hennessy eventually getting the opening point when he slotted over a free for Graiguecullen. The Heath wasted little time in responding, as Andrew Booth broke the ball down for Daithi Carroll, and he registered his fifth point of the day.

In a reverse of the first half, it was then Graiguecullen who started to get on a run of scores, while The Heath struggled. Ambrose Doran started the run with an excellent point from the right wing, and Brian Byrne's dipping shot moments later was fisted over by Joe Walshe.

Ian Fleming then pointed a free to narrow the gap down to one, and then Ambrose Doran raced through to point off his left foot to level the scores.

The Heath wasted no time in restoring their lead, Mark Dunne tapping over from 14 yards out, but Ian Fleming soon had Graigue level, from a free.

That gave Graigue another boost, and Fleming added another free before Mark Timmons got forward from centre-back to kick another, as they lead by two with four minutes left.

That would prove enough for the men in green and red, as they managed to hold off whatever The Heath could throw at them to claim a narrow victory.