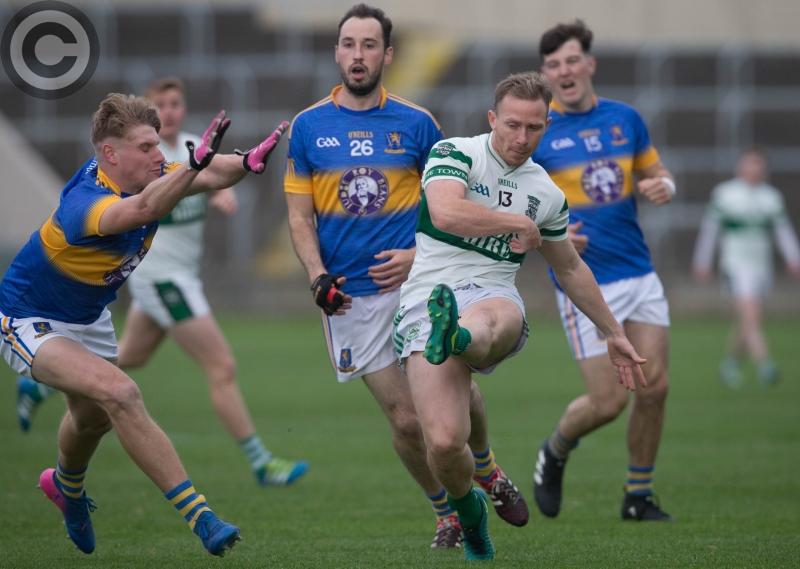 Portlaoise cruised into the quarter-finals of the Laois SFC thanks to to this emphatic win over O'Dempsey's on Saturday night.

After an evenly contested opening quarter, Portlaoise just took a stranglehold on the game, and the Killenard men had no answer for them. Three goals in nine minutes after half time removed whatever competitive element there was in the game, as last year's beaten finalists sounded an ominous warning to the rest of the teams in the competition.

This game got off to a bright start, as Brian Nugent had O'Dempsey's ahead inside of a minute, only to see Paul Cahillane cancel it out at the other end soon after. Buoyed by their league success, O'Dempsey's looked confident early on, with Eoin Finlay and Nugent again hitting the target, O'Dempsey's 0-3 to 0-1 in front after four minutes.

Portlaoise then responded as they so often do, with a goal. Paul Cahillane held possession on the left wing until he spotted the run of Ciaran McEvoy, and he pinged the ball across the penalty area to allow McEvoy finish first-time from close range.

Scott Lawless added a point soon after, but O'Dempsey's reacted really well to the setback. Stephen O'Leary pointed a couple of frees to draw them level, and he then added one from play as they went ahead. Indeed, they could have been further in front but for some outstanding goalkeeping from Graham Brody, as he pulled off a stunning double-save from Conor Meredith and Stephen O'Leary.

Now a point up, O'Dempsey's were in a good position, but Portlaoise slowly took control of the game. Cahillane pointed from play to draw them level, and then Gareth Dillon quickly added another to see them move in front. Benny Carroll, Scott Lawless and Cahillane again all pointed to see O'Dempsey's in trouble, and then they got their second goal.

Gareth Dillon appeared to be shooting for a point, but the ball instead landed in the grateful arms of an unmarked Adrian Kelly on the edge of the six yard box, and he hammered the ball to the net. Brian McCormack added two more points and Conor Dunphy also hit the target as Portlaoise went ten points clear, and a quick exchange of pointed frees between O'Leary and Cahillane left Portlaoise 2-11 to 0-7 up at half time.

O'Dempsey's were going to need a strong start to the second half to make a game of it, but Portlaoise put the result beyond doubt within a minute of the restart. Benny Carroll kicked a point within seconds of play resuming, and from the kickout, Portlaoise broke forward again. The ball was worked to Paul Cahillane on the edge of the area, and his brilliant shot found the bottom corner.

To eradicate any lingering doubt, they went on to add two more goals in the next few minutes. Adrian Kelly added a carbon copy of his first, catching the ball on the edge of the square before finishing, and Paul Cahillane added another from the penalty spot.

The rest of the game was a non-contest, as O'Dempsey's added a couple of points through Stephen O'Leary, but they never came close to a comeback.

They were at least given late cause to celebrate, as a clinical counter attack ended with Michael Finlay rifling a shot into the top corner in what was the goal of the night.