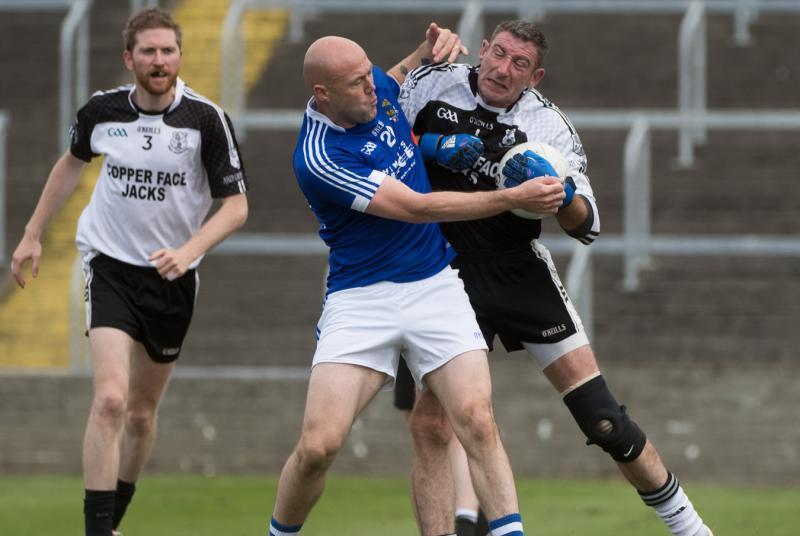 Donie Kingston proved once again why he is head and shoulders above every footballer in the county, with an effortless 1-6 to steer Arles-Killeen back on the right road to challenging for this year’s championship.

After suffering a surprising setback against young guns Portarlington in round one, Arles-Killeen showed that they are far from finished in the senior championship.

Eoin George caught a high ball close to goal, and his powerful shot raised only a white flag for Mountmellick Gaels when a goal was on, within the first minute of play. Mountmellick Gaels then passed up on an enormous invitation to get off to the dream start, as Jason Caffrey’s penalty was poorly taken and wayward.

Arles-Killeen reacted to this wake-up call with two points from Jason Enright, one from play and one a free. However, Mountmellick Gaels were the more impressive team in the opening stages, and Niall Mullen scored a free, before they got their goal.

Mullen hand passed one into the square, and the onrushing David Kelly used his momentum to jump the highest and fist into the net.

Paul Kingston's pace was, as usual, causing problems, and he offered Donie Brennan a chance at goal, but he took too much out of it, which allowed Mountmellick Gaels goalkeeper Eoghan Keogh the chance to manoeuvre himself and pull off a brilliant save.

Paul Kingston then had an opportunity himself, but he could only shoot straight at keeper Eoghan Keogh. Mountmellick Gaels grabbed the next two points through Brendan Reddin and James Mullaney, but in the next fifteen minutes of the half they only managed one score, which swung the tie in Arles-Killeen’s favour.

A Donie Brennan point was followed with a Donie Kingston goal, after he unsurprisingly rose highest to catch a long ball, bullied his way past three defenders, and scored low and hard.

This followed with an onslaught of points from Arles-Killeen, those coming through Jason Enright, Conor Keightley, Donie Brennan and Donie Kingston. Niall Mullen struck the last point of the half for Mountmellick Gaels, as they went in two points behind.

Arles-Killeen pulled further in front at the start of the second half, with points from half-time substitute Shane Byrne after quick play from both Kingstons, and Conor Keightley’s second wonderful score of the match.

The sides traded points three times in a row, with Mountmellick Gaels points coming from Colm Coss and two by Mullen, with Donie Kingston doing all the damage for Arles-Killeen.

Donie made it five points on the trot for the big man, adding on a further two and selling dummies like there’s no tomorrow.

Mountmellick Gaels main man Mullen notched over a free, but Jason Enright all but ended the contest with a nice outside of the boot score to bring Arles-Killeen six clear. Mountmellick were not throwing in the towel though, and James Mullaney and Brendan Reddin closed the gap.

Paul Kingston then put the nail in the coffin for Mountmellick Gaels after he beat his man routinely and toe-pegged it past Eoghan Keogh. Mountmellick were awarded a late consolation penalty, with Mark Grennan converting, but Arles-Killeen put gloss back on the scoreboard with Conor Keightley and Enright points.