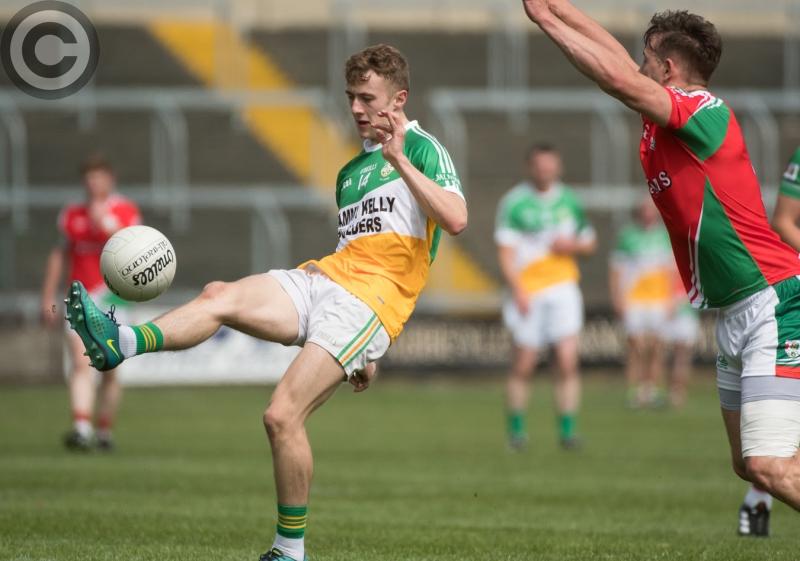 Despite an unspectacular performance on Crettyard Gaels part, they still had enough to hold off a spirited Clonaslee St Manmans Gaels team to advance to Round 3 of the Laois SFC.

In Evan O’Carroll and Cormac Murphy, Crettyard Gaels had the two best forwards on the pitch and that was the reason they survived this one.

Evan O’Carroll opened the scoring for the day, converting a close range free. The pattern of the game was that scores were hard to come by, with Crettyard Gaels dominating early on, but failing to convert most of the chances.

Cristóir Maher had Crettyard Gaels two up inside eight minutes, but Clonaslee St Manmans Gaels fired off the next two points to level. Two placed balls were sent over by Glen McEvoy.

Cormac Murphy pointed Crettyard Gaels into the lead again with a point, before the full forward added a goal a couple of minutes later. A hopeful soccer-style pass was sent up the field by Patrick Brennan, and Murphy gladly collected, taking it past his man and making no mistake with the finish.

Glen McEvoy knocked over another placed ball for Clonaslee St Manmans Gaels, but Crettyard Gaels looked in control, with points from Murphy (free) and a fisted one from midfielder Patrick O’Reilly.

Clonaslee St Manman's Gaels only scorer, Glen McEvoy, pointed their fourth point from the ground to keep them close enough. However, when a Clonaslee St Manmans Gaels defender slipped it looked like O’Carroll would grab Crettyard Gaels second goal, but goalkeeper Conor Gorman pulled off an excellent save to deny.

O’Carroll won a mark as we approached the break, passed it out to Cristoir Maher, who placed a lovely ball into Michael Nash, and he pointed in what was the best move of the half. Clonaslee St Manmans Gaels’s Mark Stapleton ended the half with a well taken score, and Crettyard Gaels held a four point advantage at the interval.

John Scully left just three in it after the break with a score for Clonaslee St Manmans Gaels. Another goal chance followed for Crettyard Gaels, but Murphy only managed a comfortable shot straight at Conor Gorman.

Murphy somewhat made up for his error with a point a minute later, but Clonaslee Gaels were beginning to dominate possession, and Willie Young restored the gap to a goal.

That advantage was soon wiped out when Clonaslee St Manmans Gaels’s Gearoid Carroll was hauled down inside the square, and Conor Gorman showed he can perform at both ends, sending Jeff Moran the wrong way.

O’Carroll attempted to calm the storm with a point, but Clonaslee St Manmans were sticking to them, and McEvoy landed a free to level once again. Murphy returned the favour with a free of his own, but big full forward Darren Hogan, who had been really well marshalled by Sean O’Shea all day, got his first and it was 1-9 apiece with ten minutes of normal time to play.

However, Murphy and O’Carroll showed their class just when their team needed. O’Carroll pointed a free, before Murphy got one from play.

Clonaslee St Manmans Gaels went in search of a winning goal, but Crettyard Gaels scored last with a Murphy free to ensure victory.