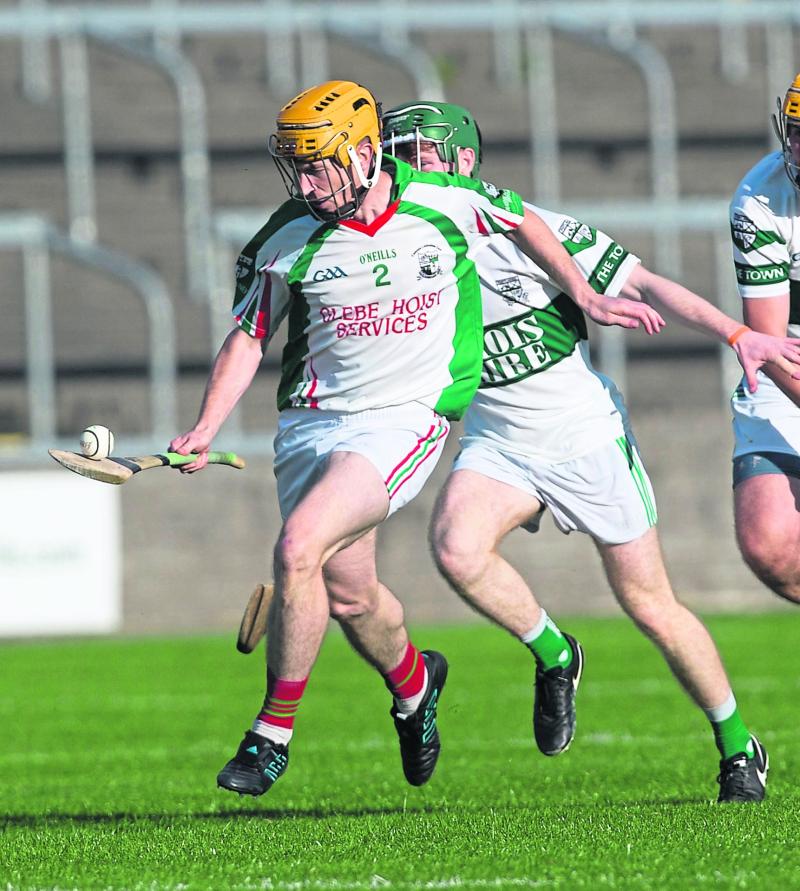 James Corrigan in possession for Rathdowney-Errill.

It is difficult to comprehend that one of these teams will be out of the championship before September, but that is the fate awaiting them this Sunday.

The stakes are high for both teams, but they come into the game on the back of markedly different routes to this quarter-final. Rathdowney-Errill were edged out by Camross in Round 1, a game they could have won, before a routine victory over Portlaoise last time out.

Clough-Ballacolla, meanwhile, were humbled by Borris-Kilcotton in Round 2 after themselves beating Portlaoise in Round 1. That loss to Borris-Kilcotton, on a scoreline of 5-18 to 1-9, was their second 21 point loss in a little over a month, after being hammered by Camross in the league final.

One loss of that margin for Clough-Ballacolla would have been inconceivable earlier in the year as they ripped through Division 1 of the league, but for them to suffer that fate twice is worrying. The loss of Picky Maher is signficant, but he can't be expected to make up a 21 point gap, so there are greater problems at play.

They are an ageing side, no doubt, as they still lean heavily on the likes of John A Delaney, Mick McEvoy, Darren Maher, Canice Coonan and Willie Hyland, but all of those players are still more than capable of performing at this level. After the shock of the Borris-Kilcotton defeat, a game against their nearest and dearest will have surely seen things stepped up in training.

Rathdowney-Errill were not really tested last time out, so they will have to be ready to fire here. Mark Kavanagh is gone for the year, but with Tadgh Dowling getting some more game time, he should be able to fill the void left by Kavanagh's injury.

It's a fascinating game in prospect, matches between these two always are, but with Clough-Ballacolla after suffering two heavy defeats already this year, it points to some problems which may not be rectified in time for this clash. Rathdowney-Errill to advance.