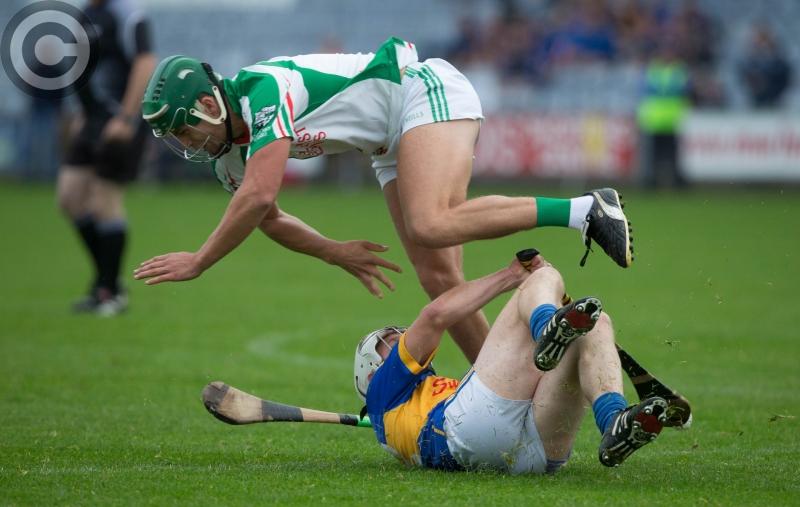 Clough-Ballacolla are through to a Laois SHC semi-final clash with Abbeyleix after hanging on to beat Rathdowney-Errill by three points in O'Moore Park on Sunday night.

Willie Dunphy's first-half goal proved to be the difference in the end, although in truth, Clough-Ballacolla were the better team throughout the game, as Rathdowney-Errill left it far too late to mount a comeback.

The game began at a cracking pace, with Willie Dunphy firing over the opening point of the game with 30 seconds on the clock, despite shipping a heavy challenge from Alan Delaney in the process. Ross King drew Rathdowney-Errill level with a free, but Stephen Bergin soon had Ballacolla back in front.

James Ryan then pointed for Rathdowney-Errill to keep up the hectic pace of play, but Clough-Ballacolla struck for the opening goal of the game moments later. Willie Dunphy was the man to provide it, as his powerful shot from close range left Noel Brennan with no chance.

Rathdowney-Errill responded well, hitting three of the next four points through Ross King (free), Paddy Purcell and James Ryan to narrow the gap down to one, Robbie Phelan pointing in reply for Clough-Ballacolla.

From that point on, however, Clough-Ballacolla were the dominant side, as they started to pull away. A run of four points without reply from Willie Hyland (free), Lee Cleere, Willie Dunphy and Stephen Bergin left them five to the good, and Rathdowney-Errill looked way off the boil. Their touch was poor and their tackling and passing was equally bad.

Paddy McCane and King (free) gave them a brief respite, but Clough-Ballacolla again came back strongly. Lee Cleere pointed two superb scores from distance, and another long-range effort from Aidan Corby was added to by a Willie Hyland double, as CLough-Ballacolla now lead by eight points.

Rathdowney-Errill needed to try to claw their way back into it before half time, and they managed to get within striking distance. Tadgh Dowling pointed twice and Ross King added a free, and with Willie Hyland tagging on one more Clough-Ballacolla, it meant six points separated the teams at the interval, 1-13 to 0-10.

Willie Hyland fired over a lovely point moments after the restart to get Clough-Ballacolla off to a bright start, but Ross King and James Ryan pointed soon after to give Rathdowney-Errill a timely boost.

King then added a free to cut the lead to four, only to see Tom Delaney reply within seconds for Clough-Ballacolla. A Shane Dollard point left four in it again, as bit of a scuffle saw the intensity of the game kick up a notch.

Willie Hyland then pointed a couple of frees for Clough-Ballacolla to see them six clear again, as Rathdowney-Errill looked bereft of ideas in attack.

They finally mounted a comeback with  seven minutes remaining, as Ross King's free taking kept chipping away at the Clough-Ballacolla lead. However, the goal they desperately needed never arrived, nor even looked like arriving, as Aidan Corby's late point capped off a three point win for Clough-Ballacolla.