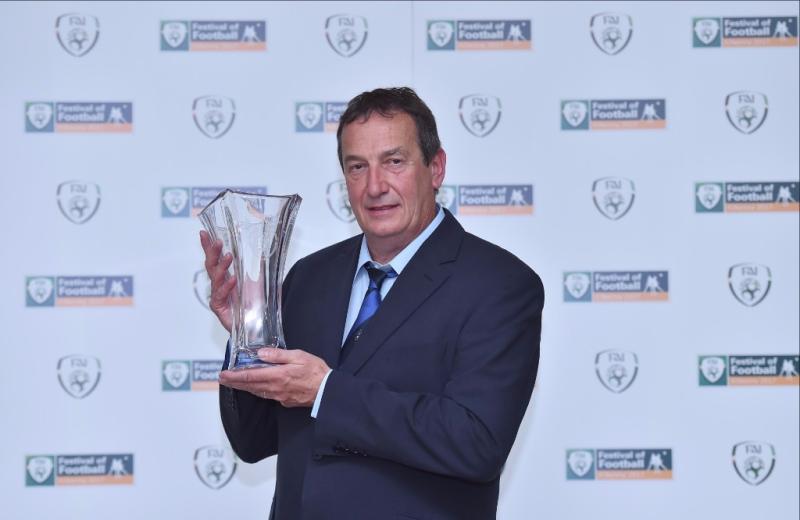 Richard McSweeney with his 'Services to Football' Award. Pic: Sportsfile

Portlaoise AFC stalwart Richard McSweeney was honoured with a 'Services to Football' award by the FAI recently, after 40 years of service to the club.

McSweeney stepped down this year after first getting involved as a teenager in 1977. Since then he has been secretary, treasurer, chairman, marked pitches, coached teams, raised money and helped to drive the club forward in any capacity he could, and he walked away now happy in the knowledge the club is in safe hands.

“The support of my wife Carmel and son Robert has been great over the years, but there comes a time when we all have to 'hang up our boots', and with newer people coming through, I decided I would start backing off a bit a few years ago.

“I'm delighted to see the club is thriving both on and off the pitch and it is in great hands with people like Mick Coleman and Chris Nestor involved, and it is going to continue.”

It says something about McSweeney's nature that he spends as more time in the interview acknowledging the work of others, and positive place the club finds itself, than mentioning his own personal milestones or seeking to praise his own role in where the club now stands.

When he got involved with Portlaoise AFC back in 1977, the landscape for the club was unrecognisable from how things are now. They rented a field beside St Fintan's hospital, which hosted their home games. They had only two adult teams, were only starting to put together a juvenile setup, and no permanent home.

If that was daunting to those involved, then it was offset by the fact they were driven by ambition and the camaraderie which drew the club together in the first place.

When Richard McSweeney first got involved with the club, it was with the intention of being a player on the fledgling youth teams the club was putting in place, but after missing out following the trials in St Fintan's, he found other ways to keep himself involved.

As a teenager he joined the committee in 1977, and despite his tender age, found himself warmly welcomed. “It was a good committee, they were very open to young people being involved and listening to their ideas, their enthusiasm and vision and they wanted to incorporate everyone. Even then the vision of the club was for us to play at the highest level possible.”

A year later, in 1978, he succeeded John Meehan as secretary. His playing career was a brief one, as he featured for the 'B' team from 1981 to '83, jokingly describing himsef as a “sunshine” player. While he might not have felt he could make an impact on the field, he was confident and comfortable in helping off it, so kept involved.

He marked pitches, hung nets, corresponded with other leagues and associated bodies, raised money and kept his shoulder to the wheel. He was involved when they finally bought their permanent home, Rossleighan Park on the Mountmellick Round, for £26,000 in 1982.

An enormous sum at the time, it took the club five years of raising money, developing pitches and meeting repayments before the finally played their first game there, in 1987. During that time they joined the schoolboy league in Kilkenny to promote juvenile soccer, and eventually joined the MSL when that was incorporated in 1996.

He was there when Portlaoise went on their famous FAI Cup run, and when their new clubhouse opened in 1990. He also coached his son Robbie's juvenile teams.

Those are all major highlights, but for someone who has been at the heart of the club for so long, it's no surprise that Richard has a few other memories which match those club milestones. “Portlaoise ran a seven-a-side tournament every year, it started out as an eleven-a-side tourament held over two or three weeks, and we had teams from all over the midlands coming to play in it, factory teams and pub teams as well, and there was a great social side to it.

“It switched to a seven-a-side and we played it over the weekend, with the first game at 6.30pm on a Friday evening, and you would meet people you hadn't seen for a year, and I really looked forward to that. The public gave us great support too, there was great crowds at the matches.”

Other highlights include an annual club trip to Manchester back in the 80s, ostensibly to play a couple of games over there, but often times the games were not exactly a priority for those making the trip!

After reaching the 40 year milestone, Richard decided to leave the future of the club in the hands of those who, one day, will likely reach the same milestone themselves.

His legacy is in the friends made, jobs completed and the thriving and vibrant club he leaves behind. There is even an U-16 tournament run by the club named in his honour as well, a nice touch from Portlaoise AFC to acknowledge his contribution.

Players and managers always get praised as the the heartbeat of a winning team, but clubs thrive because of those who keep it pointed in the right direction, and drive it forward despite being in the background. They don't always get the recognition they should, but both Portlaoise AFC, and now the FAI, have at least recognised the huge contribution made by Richard McSweeney.