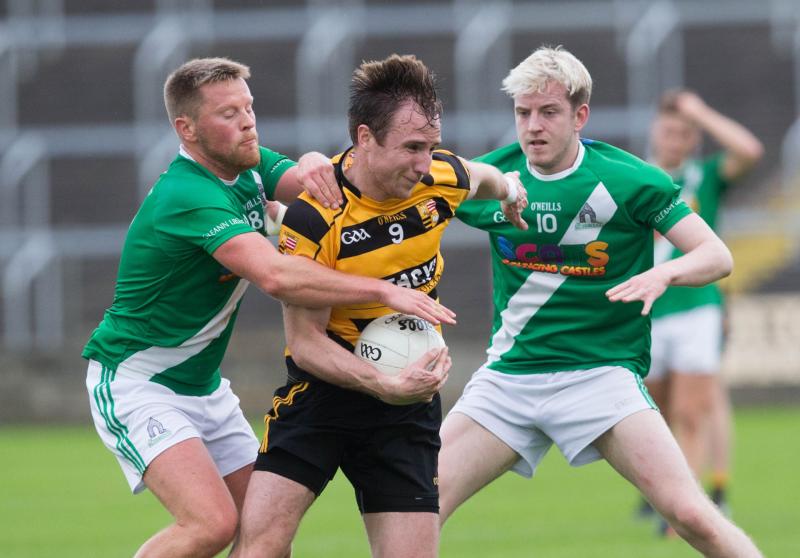 Killeshin are through to the quarter-finals of the Laois SFC, as Evan Lowry's late point earned them a narrow victory over The Heath.

In a closely fought game throughout, Killeshin managed to come back from a three point deficit with 12 minutes to go, kicking the last four points of the game to battle their way into the last eight.

The Heath got off to a bright start, with JP Nerney slotting over the opening score of the game with less than a minute played. A nice team move brought The Heath their second, as Chris Bergin was set up 30 yards out, and he calmly added their second.

Killeshin were taking their time to get going, but they finally got up and running in the fifth minute, when David Aston scored an excellent free from out on the left wing. A minute later they were level, as Evan Lowry fired over from 35 yards, and then the evergreen Cathal Brennan put them ahead.

With their tails up, Killeshin pressed on and Stephen Attride won possession inside The Heath 45, raced through on goal and fired past Joe Walshe from close range. Aston soon followed that with another free, and Killeshin had now hit 1-4 without reply to lead by five after fifteen minutes.

Credit to The Heath, they didn't panic, and fought back with a similar spell of dominance. Chris Bergin started the recovery with his second point, and Robbie Dowling then landed an excellent score from distance to leave the goal between them.

Ciaran Booth then narrowed the gap to two, before The Heath struck for a goal. Chris Bergin's shot for a point from 40 yards out struck the crossbar and landed in the grateful arms of Andrew Booth, who twisted away from his marker and slotted to the net.

Daithi Carroll (free) and Ciaran Booth saw The Heath rattle off 1-5 without reply to go three ahead, but Killeshin managed to steady the ship before half time. Aston scored another excellent free, and Cathal Brennan added another from close range to see The Heath ahead by one at the break, 1-7 to 1-6.

In a cagey start to the second half, The Heath edged two clear thanks to an Eoin Delaney free, but that was soon canceled out by David Aston's fourth point of the game. Andrew Booth then restored the two point cushion with a brilliant curling effort from way out on the right wing, with those the only scores in the opening ten minutes of the half.

Eoin Lowry got Killeshin back within one when he flicked David Aston's long range free over the bar, but The Heath back with a brilliant point from Eoin Delaney, as he pointed from an acute angle. Alan Whelan then rounded off a flowing team move with a point from close range, as The Heath pushed three ahead.

Killeshin came back at them after that, as David Aston (free) and Cathal Brennan pointed within a minute, leaving one between the sides with seven minutes to go.

David Aston then held his nerve over a 35 yard free to level the scores, and that set up a grandstand finish, as both teams struggled to find their composure in front of goal during the close stages.

In the end, it was Killeshin corner-forward Evan Lowry who kicked the all-important winner, as his point in the final minute of normal time put them one ahead. Despite five minutes of injury time, they held The Heath at bay to record a narrow victory.