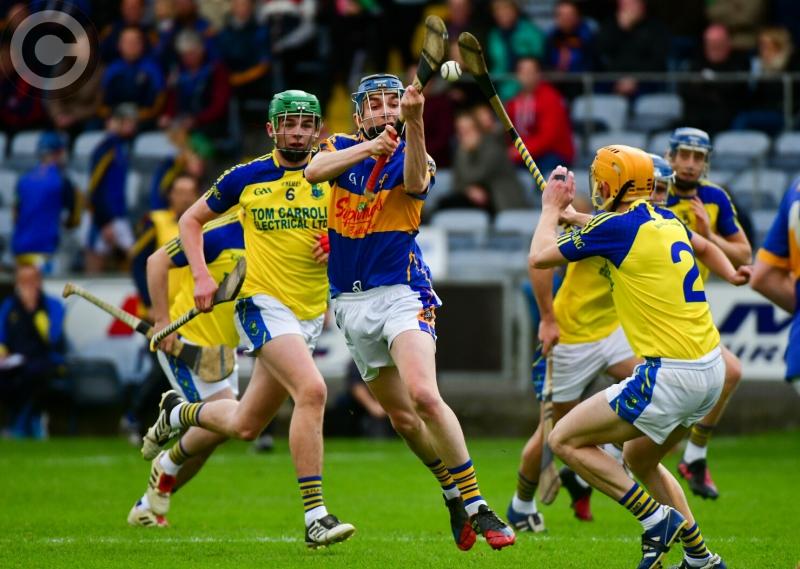 Clough-Ballacolla are through to the semi-finals of the Laois SHC, after they proved too strong for Abbeyleix in O'Moore Park on Saturday night.

Tommy Buggy's charges started the game strongly, and weathered the inevitable Abbeyleix comeback before closing out the game to secure an eight point win at the final whistle.

Clough-Ballacolla started the game like they planned on having the victory wrapped up before half time, as they hit Abbeyleix with an early onslaught. Robbie Phelan pointed with barely 15 seconds played, and Aidan Corby added another moments later.

Willie Hyland than shrugged off a couple of challenges on the right wing to point their third, as Abbeyleix looked like the proverbial deer caught in headlights, with the pace and physicality of the early exchanges not suiting them. Willie Dunphy then made it four points in four minutes for Clough-Ballacolla, as the 2015 champions looked in total control.

Eoghan Fennelly finally opened Abbeyleix' account when he fired over fro 45 yards out, and they should have drawn level soon after when Jamie Coffey was played through on goal, but Danny Hanlon managed to smother his shot.

Willie Hyland then pointed twice in quick succession, one from a free, to see Clough-Ballacolla lead 0-6 to 0-1 with just twelve minutes played.

You feared for Abbeyleix at that stage, but they managed to slowly but surely find their confidence, and they were helped by a brilliant save from Enda Rowland to deny Willie Dunphy. Eoin Reilly then pointed twice in a row to settle them down, and despite their poor start, they only trailed by three points, 0-6 to 0-3, after 20 minutes.

Reilly then pointed another free to close the gap to two points, but a Willie Hyland free quickly had Clough-Ballacolla three in front once again. Ryan Peacock responded this time for Abbeyleix with a wonderful point, as she took a heavy shoulder from Eoin Doyle but remained in control, and pointed from 40 yards out.

Abbeyleix once again had a glorious goal chance in the 27th minute when Dayne Peacock bundled his way through on goal, but the Ballacolla defence recovered to crowd him out, and he lost possession. Clough-Ballacolla had the ball down the far end of the field within seconds, and Willie Hyland sent it straight between the posts.

Ballacolla then saw a couple of goal chances wasted, as Robbie Phelan and Aidan Corby were denied by Enda Rowland. Both teams managed one more point apiece before the break, leaving Clough-Ballacolla 0-9 to 0-6 in front at half time.

Willie Hyland got Clough-Ballacolla off to a great start in the second half when he pointed a sideline cut from the right wing, but an Eoin Reilly free soon cancelled that out.

Stephen Bergin was next to score, as lovely control from him on the right wing saw him make space and his shot went straight over the bar. Willie Hyland kept up the momentum with a free, before he landed a superb point from play way out on the right wing, as Clough-Ballacolla went six ahead, the biggest lead of the game.

Abbeyleix needed to steady the ship, but they wasted a good chance to get a point back when Eoin Reilly went for goal from a 21 yard free, and it was stopped on the line by the Clough-Ballacolla defence.

Reilly did get the next score for Abbeyleix from a long range free, but Aidan Corby cancelled that out within seconds to maintain Clough-Ballacolla's six point advantage.

Abbeyleix needed something major to go in their favour now, but Clough-Ballacolla had too much experience, and they weren't going to allow themselves to get caught at this stage. Enda Rowland and Willie Hyland traded pointed frees before the most bizarre and impressive point of the championship to date.

Clough-Ballacolla's Stephen Bergin won possession 35 yards out but lost his hurl in the process. Undeterred, he jinked away from his marker, took a football-style solo and then kicked the ball over the bar from 25 yards out.

Willie Dunphy and Willie Hyland followed up with points moments later, and Clough-Ballacolla were now nine clear, and there was to be no catching them from there, as they cruised into another county final.