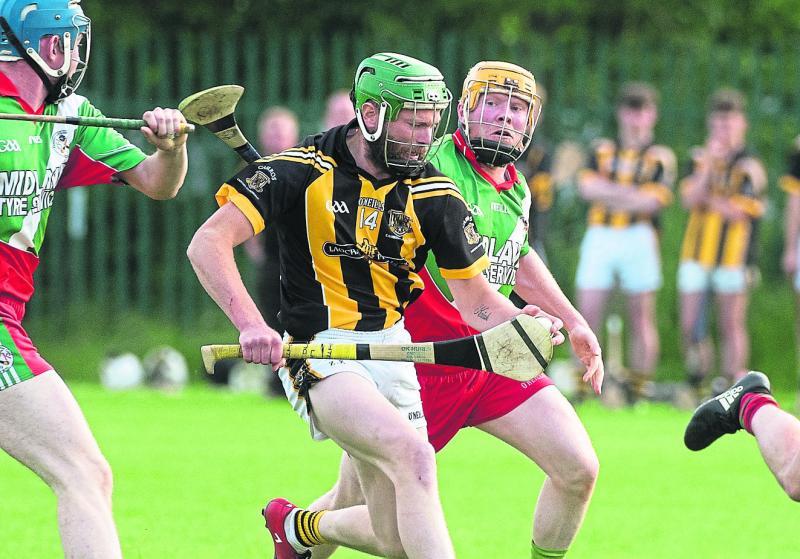 Camross dethroned the reigning county champions, Borris-Kilcotton, with six points to spare in O’Moore Park on Sunday afternoon to see them progress to their fourth final in five years.

On a challenging day weather-wise, both teams battled the ever-changing elements in O’Moore Park, particularly in the opening half as Camross hit seven wides, while Borris-Kilcotton hit nine in difficult conditions.

Camross set the scoring underway after four minutes with Zane Keenan converting a short range free to ease them into the proceedings. A minute later, Dwane Palmer lifted what was to be the first green flag of the day after Borris-Kilcotton goalkeeper, Eoin Fleming, saved the shot only for the deflection to sneak into the back of the net as Camross took an early four point lead.

Borris-Kilcotton wasted no time in getting themselves back on track as Joe Campion was dragged down while through on goal, leaving the referee with no choice but to award the penalty. Goalkeeper Eoin Fleming made the trip forward to convert the penalty, and after some handbags, he did just that to close the gap to a single point.

Camross stretched their lead to two points after eleven minutes through Keenan's second of the day, but it wasn't to last as Borris-Kilcotton rattled off two in as many minutes through PJ Scully frees to draw the sides level with a quarter of an hour played.

Camross ended their fifteen minute drought on the twenty-five minute mark when Dean Delaney and substitute Mark Dowling combined to see the substitute make an instant impact to edge them in front once again.

Keenan found time in the remainder of the half to slot a brace of frees, with a Neil Foyle point sandwiched in-between as the half fizzled out with Camross holding a narrow two point advantage at the interval on a scoreline of 1-5 to 1-3.

Camross reopened the scoring a minute into the second half through a Zane Keenan free from the sixty-five. Twenty seconds later, PJ Scully annulled Keenan's effort with one of his own to reduce the gap back to two points.

With thirty-three minutes played Eoin Fleming was called into action to pull off a superb double-save to deny Mark Dowling. But Camross didn't have to wait long as Keenan converted the resulting sixty-five to put three between the sides.

Two PJ Scully frees followed as Borris-Kilcotton chipped away at the Camross lead before Keenan broke their momentum with a free - bringing his tally to 1-9 for the day.

Borris-Kilcotton continued to chip away at the Camross lead with a brace of frees from Scully, but a long range Darrell Dooley point in the fourth minute of injury-time was the final nail in the coffin as Camross now look to the challenge of Clough-Ballacolla in the final in two weeks time.