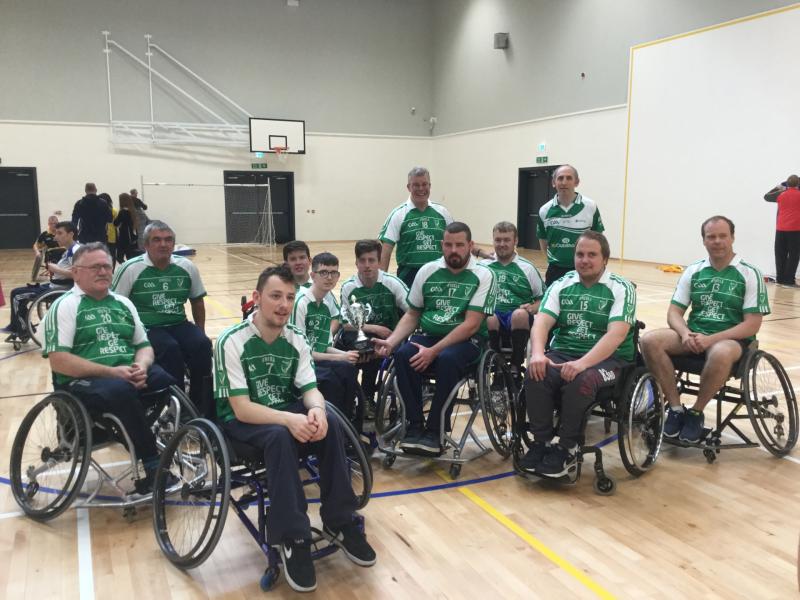 The Leinster Wheelchair Hurling team after winning the 2017 league title in Derry at the weekend.

In Leinster's first match against Ulster, they got off to a flyer with Lorcan Madden (Rathdowney-Errill) leading from the front with three unanswered goals, thanks to great support play from Paul Tobin (Mountrath) and Alex Henneberry.

In the second and third periods Ulster brought the score back to within one with excellent strikes from Peter Lewis and Ruari McDermott, as they were eventually getting by the hardworking Leinster defence.

However it turned out to be Leinster's day with two more bullets of shots by sharp shooter Gary O'Reilly found their way past the hard-worked Conor Browne in the Ulster goal to finish the third period in fine style, with Leinster winning 6-4.

In the second and final game against Connaught it was a much more one-sided affair, with Leinster on-top from start to finish and showing why they were 2016 All-Ireland champions, and now on the way to being League champions.

Leinster showed the strenght and depth of their squad with Will O'Mara (Dublin), Tom Carey (Naas, Kildare), Sean Bennett (Rosenallis), Louis Cleary (Dublin) and long time veteran Ciaran Cushen (Stradbally) all coming on to show pride in the jersey to hold their own and play a key part to seal a 7-0 win over the westerners.

Lorcan Madden again showed why he is the was the Player of the Year in 2016 and captain of Leinster with four more goals, showing class that wouldn't have looked out of place in Croke Park. Again Paul Tobin and Sean Bennett kept out Tommy Flemming and Sarah Cregg.

Will O'Mara helped Leinster to a clean sheet and Louis Cleary and Alex Henneberry scored two more goals to bring the game to 6-0 with Gary Reilly finishing from close range late on past Connacht's net minder Liam O' Boyle.

Leinster now go into the All-Ireland Championship finals on the 14th of October in Sligo as they aim to do the Championship and League double for the first time.