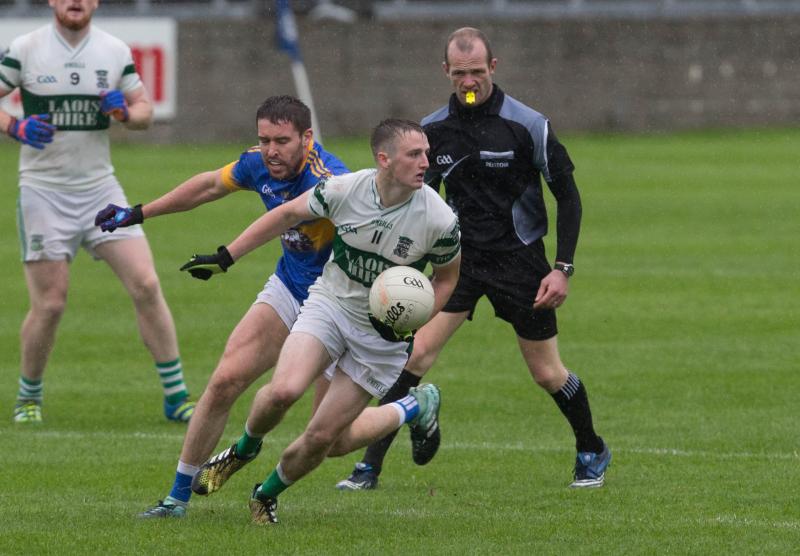 Portlaoise are through to the semi-finals of the Laois SFC after a comfortable win over O'Dempsey's in O'Moore Park on Sunday afternoon.

Malachy McNulty's side were comfortable throughout the game, leading by six points at half time and they never looked in any danger. O'Dempsey's proved a more stubborn opponent than the last time the teams met, but they hadn't enough of a cutting edge in attack to trouble Portlaoise.

Heavy downpours before the game made conditions very difficult, and that was showcased early on, with both teams struggling to settle down. Scott Lawless missed an early free for Portlaoise before Ciaran McEvoy blazed an excellent goal chance wide, while O'Dempsey's were struggling to get out of their own half.

Brian McCormack eventually opened the scoring with a trademark point off the outside of his left boot, from the left wing, and Scott Lawless quickly doubled the Portlaoise lead. Conor Boyle then hit the target from distance, before Bruno McCormack saw a goal effort from a tight angle hit the crossbar and bounce away from goal.

O'Dempsey's were offering little response to relentless Portlaoise attack, and Scott Lawless (free) and Gareth Dillon pushed them five clear. O'Dempsey's didn't register a shot at goal until the 17th minute, when Míchael Finlay's effort dropped short. Portlaoise hit back with a free from Paul Cahillane and Brian McCormack added his second, before Brian Nugent finally opened the O'Dempsey's account with a free.

Bruno McCormack had that cancelled out within seconds at the other end, but the score of the half from Eoin Finlay, a wonderful point from way out on the right wing, left Portlaoise six clear at the interval, 0-8 to 0-2.

There was no respite for O'Dempsey's when play resumed, with Gareth Dillon pointing twice in the opening three minutes to push Portlaoise eight clear.

O'Dempsey's opened their account for the half with a point from Stephen O'Leary, but Brian Mulligan had hit back for Portlaoise within a minute. Brian McCormack then saw his shot for goal excellently saved by Padraig Bannon, with the conditions worsening as the half wore on.

Matthew Finlay fisted a dropping ball over the bar for O'Dempsey's only to see Kieran Lillis respond with a long-range effort, as eight points remained between the teams heading into the closing stages.

That lead went out to nine thanks to a lovely long-range score from Brian McCormack, and then Benny Carroll popped up to make it a ten point game. The O'Dempsey's support were given cause to cheer after that, when Eoin Finlay won a penalty and Conor Meredith drove low past Graham Brody.