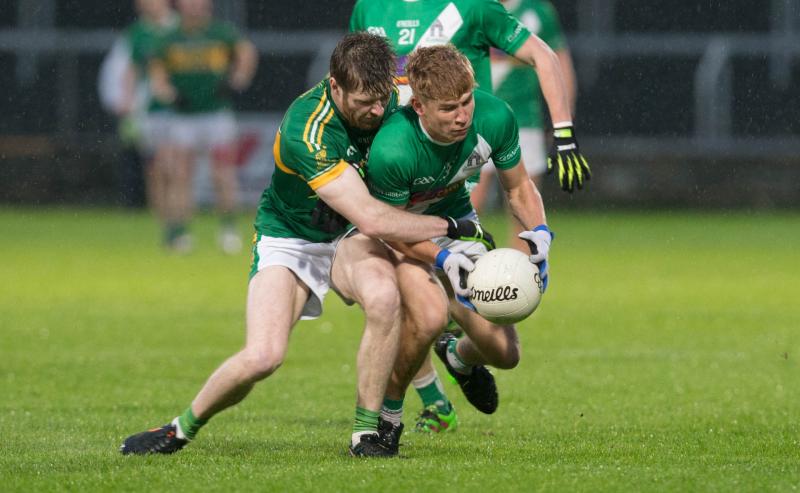 Ballylinan will take on Portarlington in the Laois SFC semi-finals after a hard-fought win over Killeshin in O'Moore Park on Saturday night.

In a game played in horrendous conditions, Gary Walsh's goal in the 53rd minute proved to be the crucial score. The game had been in the balance up to then, but Ballylinan finished the stronger of the two sides and march on to the last four.

The game got off to a bright start, as Eoin Lowry kicked an excellent point for Killeshin with a little over a minute gone. Both teams play an attacking brand of football, and that was on show early on, despite the dreadful conditions.

Scoring was nonetheless difficult, and seven minutes would pass before we had another score, this time David Aston hitting the target for Killeshin. Ballylinan finally opened their account after that, and what a score it was, as Cieran Farrell cut in from the right wing and curled over a brilliant point off his left foot.

Two minutes later, Ballylinan had the ball in the Killeshin net, and what a goal it was. Alan Farrell burst through the Killeshin defence, worked his way to the right side of the penalty area before unleashing a pinpoint accurate shot to the far bottom corner.

Killeshin responded within a minute, Cathal Brennan kicking a nice point to settle them back into the game, but scores dried up for a spell after that. Conditions really were dreadful, and ten minutes would pass before another score was registered.

The best chance during that spell fell to Cieran Farrell, when Shane Coakley's misplaced pass allowed him a shot at goal, but he thundered his effort off the crossbar.

Ballylinan finally ended the drought when Andy McEvoy jinked away from his marker before pointing from 25 yards out. Alan Farrell then rounded off the scoring for the half with a superb effort from the right wing, as Ballylinan lead 1-3 to 0-3 at half time.

They were quickest out of the blocks in the second half too, with Gary Walsh scoring a free in the third minute. Stephen Attride was next to score, as he launched a brilliant long-range effort between the posts from beyond the 45 yard line.

Another Gary Walsh point had Ballylinan four clear, but the game was thrown back into the balance after that. Eoin Lowry launched a high ball into the Ballylinan area and raced after it. When the ball broke, Lowry came racing through to power the loss ball to the net, reducing the gap to one, 1-5 to 1-4, with 15 minutes to play.

Andy McEvoy settled any Ballylinan nerves with a nice point from 30 yards out, before the crucial score of the half. Jamie Farrell's clever ball into space in front of the Killeshin goal allowed Gary Walsh to race through, and his first-time soccer shot flew past Shane Coakley.

Walsh followed it up with a brilliant point moments later, and Killeshin were on the ropes now. David Aston got a free for Killeshin to keep the hope alive, but Ballylinan finished strongly. First Alan Farrell scored a brilliant point from the right wing, and then James Redmond powered in their third goal to secure a semi-final place.