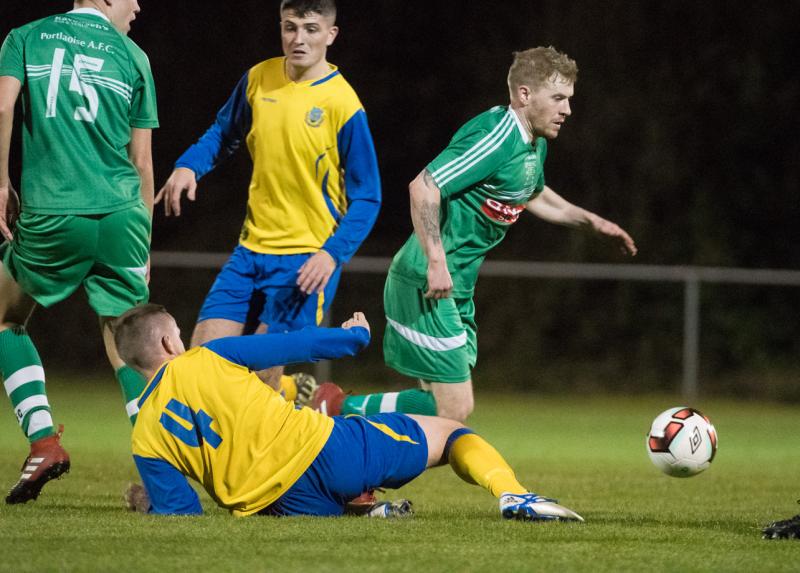 This cup tie came at the wrong time for Portlaoise, as they were forced to make several changes due to normal starters being unavailable for selection thanks to the football season reaching its climax.

The losses of the likes of Paul Cahillane, Colm Poole and Aaron Rafter proved too much in the end, as they were beaten by a solid Home Farm outfit.

It was an intense game at the beginning, with Portlaoise marginally shading the possession, but failing to create any chances whatsoever. Jack McMullan had the first half-chance of the game, but his shot was easily caught by Mateusz Cwienk in goals for Portlaoise.

Portlaoise continued to play some good football in patches, but all the chances were going the way of the away team, with Eoin Murray given an excellent opportunity to break the deadlock, but his finish was weak.

Home Farm did grab the first goal of the game though, as a low cross from Christy Doran gave Eoin Murray another chance at goal, with Mateusz Cwienk pulling off a terrific save, but Gavin Carroll poked home the rebound to open the scoring.

Again, Portlaoise would continue to play good football in patches, but no chances were created throughout the half, and they went into the break a goal down.

The second half began where the first left off, with Eoin Murray going close again, but Mateusz Cwienk kept Portlaoise in it, pulling off another superb save to deny.

However, Home Farm got a big goal to go two goals to the good five minutes after half-time, and what a goal it was. Half-time substitute Sean Goulding received the ball well outside the box ,took one look up, and chipped Cwienk with a deft shot.

The game kept up its usual flow, a fairly even contest, but with Portlaoise struggling to carve out clear-cut opportunities and get them back into the game. Ciaran O’Sullivan nearly wrapped up the game for Home Farm, but his effort was cleared off the line by the impressive Danny Molloy.

Teenager Niall Doran had a chance near the end for Portlaoise, but he agonisingly watched his shot drift just wide of the post. For the remainder, Portlaoise just struggled to get past a solid Home Farm defence, and so Home Farm trudge on in the cup, while Ger Dunne’s charges drop out.