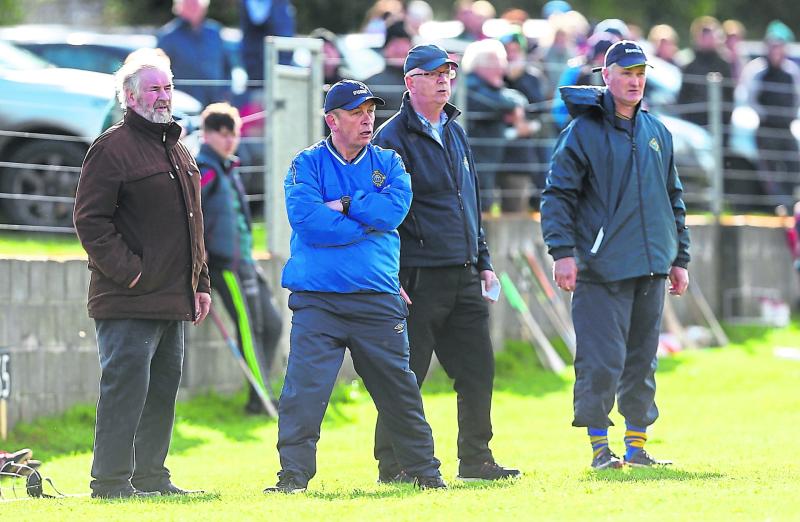 Clough-Ballacolla manager Tommy Buggy (centre) with the rest of the management team.

In the run up to a big occasion like a county final, perspective can be lost quite easily. The pressure of the occasion, the months of toil to get this far, they can skew the judgement.

That is especially the case for those at the heart of the preparations, but Clough-Ballacolla manager Tommy Buggy seems impervious to it all.

A week out from the game, the Castlecomer native can at once seem utterly consumed with the topic at hand, but still detach himself from the scenario to see that there is a much bigger picture here.

“You have to be half cracked to play this game” he muses, “but the joy winning the game will bring to either Clough-Ballacolla or Camross, no money could buy it, and it would give both villages a massive lift.”

It is on his shoulders now to make sure he has the Clough-Ballacolla players as ready as possible to bring that joy back home with them. It would be a remarkable end to what has been a remarkable year for the club's senior team, and it hasn't been remarkable for all the right reasons. “It has been a topsy-turvy year” reflects Buggy. “We have had some exceptional performances, and some very poor performances.

“The days when we have not turned up, or haven't been 'in the zone', we have suffered badly. In the league final defeat, we were out-hurled, out-fought and out-smarted. When you make mistkaes, good teams will punish you, and when you're not mentally tuned in, you get what we got.”

“Clough-Ballacolla are a very united club, from the chairman down, and when things were not going our way and we had a problem, then we solve it, make amends, and move on.

“The players took it on after the Borris-Kilcotton game, they said they didn't want to exit the championship like that.”

He, like all of those on saffron and blue, will be hoping for one of their better days in the final, but he has been around long enough to know that so much in the final depends on how the players cope with the occasion as much as the game itself. “A lot of times in a final, it is down to your attention on the day, and how you deal with different adjustments.

“If you lose a goal, how do you deal with that? How do players deal with the stuff before the game, the parade and things like that. Some players turn in man of the match displays, so it all depends on how you cope with things on the day.”

To that end, Clough-Ballacolla are in good shape, as they will have no final debutants in their team, with most of this group having started the 2015 decider against Camross.

“Stephen Bergin, Robbie Phelan, Lee Cleere, Ronan Broderick, Aidan Corby, they are all young men, it's a big day for them, but they have had a taste of it before, but so have Camross as well.

He is understandably wary of the Camross threat, having already lost a Laois SHC final to them back in 2013 as manager of Borris-Kilcotton, and he knows the great strengths they have. “Camross are very solid and very structured, and they hurl as a team, all the time.”

That spell with Borris-Kilcotton meant he was familiar with the local scene before he got involved with Clough-Ballacolla, and he will spending even more time in the county now too as he gets ready to open a new business in Portlaoise in the coming weeks. Having retired from the prison service, he is now in business with his brother, as they open a new auctioneers office, Property Partners Buggy, on the Main Street.

It's a busy time in the life of Tommy Buggy, but he is still enjoying everything that hurling has thrown up, and he is particularly impressed by the club he currently manages. “I have to say, this is an amazing club.

"They are a small rural club, but they still field four adult teams, they were in an U-14 final on Saturday and a minor final on Sunday, it is great work. But, Camross are the same, they are going for a minor-senior double for the first time in their history, so there is a lot to play for, for both teams.”