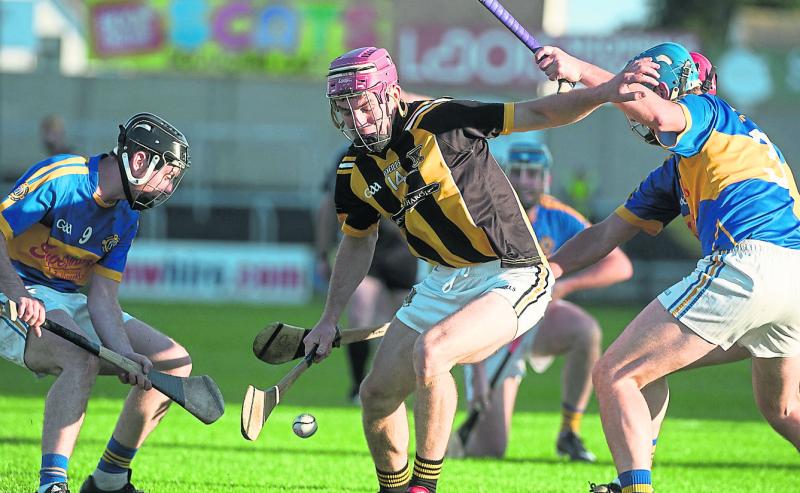 The teams have already met in the league final this year.

For the second time this year, Clough-Ballacolla and Camross will do battle in a final.

It's fair to say that if the league final is anything to go by, then it's advantage Camross. Having humbled Clough-Ballacolla on that occasion, they looked set to sweep all before them when it came to the championship.

However, the championship has contained pitfalls for both teams so far this year, meaning only victory here can constitute a successful season for either team.

For Clough-Ballacolla, it has been a real rollercoaster of a year so far. They were flying high for most of the league, winning five and drawing one of their opening six games, before things went a bit pear-shaped.

They lost their final game to Camross by seven points, then promplty loss to Camross again in the final, this time by a morale-crushing twenty-one points.

They did at least learn something from the game, and they abandoned the experiment of Willie Hyland at centre-back and Darren Maher at wing-forward, instead reverting the team to a more traditional line up.

Their championship opener against Portlaoise couldn't come quick enough, and they duly won that game without too much fuss. Then came another twenty-one point defeat, their second in three competitive games, this time against Borris-Kilcotton, as they looked bereft of the confidence and class that had won them three championships in seven years.

Tommy Buggy and his management team deserve a lot of credit for turning their season around so dramatically. In many respects, being drawn to play Rathdowney-Errill in Round 3 was a blessing, because if there was one side that would force them to knuckle down and dig out a performance, it was Rathdowney-Errill.

A fairly routine victory over Abbeyleix followed in the semi-final, and now they are back in the county final, their fifth appearance in nine years.

To get here without Picky Maher is very impressive, and his absence has allowed Willie Hyland to resume the mantle of being their main scoring forward. You can see that he enjoys the responsibility of the role, and if Picky was still in the side, Willie probably wouldn't have played so well this year.

Obviously, they would prefer to have both to call on, because there is huge pressure on Willie Hyland and Willie Dunphy to shoot them to glory. Their other forwards are undoubtedly talented, but none can run up the kind of scores that Hyland and Dunphy are capable of.

For Camross, it has been an odd sort of season. After their brilliance against Clough-Ballacolla in the league final, their championship form has been something of an anti-climax. Maybe we expected too much of them after that, but they have yet to hit the heights of that performance.

It seems churlish to be picking faults in a championship campaign that has yielded victories over Rathdowney-Errill, Ballinakill Gaels and Borris-Kilcotton (the three teams which, with Camross, made up the last four in the 2016 SHC), but they have still given the impression of a team playing within themselves.

The nadir of their campaign, of course, was the loss to Abbeyleix. It seemed inconceivable coming into the game that Camross would lose, but in doing just that, questions marks have hung over them ever since.

Those questions focus on whether the league final performance was a bit of fluke, whether they can produce anything like that again, and whether they have it in them to quickly rediscover their best form.

This being Camross, we're not inclined to write them off, and on the balance of things, they come into the game as favourites. Both teams have strong starting teams, but Camross probably have more options on the bench.

In the semi-final, they could call on Mark Dowling, Andrew Mortimer, Lorcan Burke and Darren Gilmartin, along with talented minors like Oisin Bennett and Eoin Gaughan.

For Clough-Ballacolla, their experience on the bench comes in the form of Damien Bergin and Brendan McEvoy, while after that Tommy Buggy is looking at young players who are largely untested at this level, such as Brian Corby and Jordan Walshe.

The advantage would seem to be in Camross' favour in that regard, and Arien Delaney could yet spring a surprise or two on us all with his starting team too. You only have to look at the nomadic existence of Dwane Palmer in the starting fifteen to see how they adapt themselves to every game.

In their four games so far, he has started at corner-back, wing-back, full-forward and wing-forward. Zane Keenan has started two games at corner-forward and two at centre-forward. Trying to predict the Camross starting team is a fairly pointless enterprise.

Clough-Ballacolla will likely be more predictable, with the same team starting both the quarter-final and semi-final. They will put faith in their players to get the better of whoever they come up against.

Overall, this has been a largely disappointing championship. After the drama of 2016, where both of the semi-finals and the final went to a replay, this year has seemed rather mundane in comparison. There haven't been that many stand-out games, and a lot of the teams appeared to be struggling for form.

The same could be said for the two finalists, who are searching for their best form too. There is hardly a better platform to produce it than a final, and the championship as a whole needs a blockbuster decider to at least round it off in style.

The result will hinge on a handful of key players, and a few crucial match-ups on the field. The league final result was probably a bit of an outlier, so we're unlikely to see a game as one-sided as that, but we'll stick our necks on the line and tip Camross to edge home in the end.