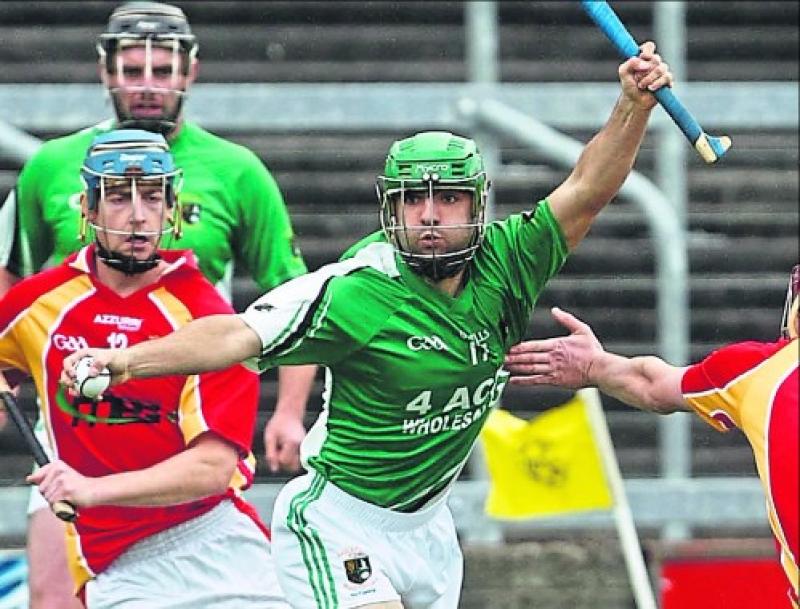 Man of the Match Darragh Connolly.

Ballyfin Gaels held off a spirited Colt Gaels side to claim the Laois SHC 'A' title in O'Moore Park on Sunday.

Twelve months on from their agonising, last-gasp defeat to Castletown, Fintan Deegan lead his team back to the final and they made no mistake this time around. Leading by eight point at one stage in the first half, they held off a strong second half comeback from Colt Gaels to claim the title.

Ballyfin Gaels got off to a bright start, with Gareth Dunphy doing what he does best and firing over a free with a little under two minutes played. Colt Gaels responded through Kevin Bergin to level the scores, and then a Chris Murray free pushed the Raheen men into a narrow lead.

Darragh Connolly eventually brought Ballyfin Gaels back on level terms, after two earlier effort for them were waved wide. Eamonn Duff reclaimed the lead for Ballyfin, and they kept building it the whole way to half time.

Gareth Dunphy pointed his second free, and then quickly followed it with his third as Ballyfin started to take control. Eanna Lyons pushed them four clear with a nice point on the turn from 40 yards, and that finally prompted a response from Colt, as Chris Murray floated over a free.

There was lull in the scoring for a spell after that, but Ballyfin Gaels ended it when Darragh Connolly got his second of the game. Eanna Lyons then rose highest on the edge of the square to pluck Sean Lowry's long ball from the sky, and he shot over his shoulder for a wonderful point.

Gareth Dunphy then pointed two more placed balls either side of Kevin Bergin's second score of the game, as Ballyfin Gaels kept pulling further ahead. The last action of the half saw Dunphy tap a 21 yard free between the posts, and as the teams headed to the dressing rooms, Ballyfin Gaels enjoyed a healthy advantage, 0-11 to 0-4.

When Ballyfin Gaels came out and hit the first score of the second half, through another Gareth Dunphy free, it looked like they were going to coast home from there, but Colt Gaels battled back.

James Keyes kickstarted their comeback with a brilliant point, as his sideline cut from all of 40 yards split the posts. Chris Murray followed that with his third point of the game, and then chipped in with a free, as Colt Gaels enjoyed their best scoring run of the game.

All their good work was almost undone soon after that though when Ballyfin Gaels were awarded a penalty. Gareth Dunphy stepped up to take it, but his shot was straight at Stephe Sinnott, who saved and cleared the danger. Davy Connolly managed to get a point for Ballyfin moments later, but it was a big chance missed for Ballyfin Gaels.

Colt Gaels responded to that let-off with another brace of points from Chris Murray, as the gap was now down to just four points. Gareth Dunphy eased some of the mounting pressure with a free, but Colt Gaels were refusing to go away, and another Murray free cut the gap back down to four.

Murray was on hand once again a minute later with a another free, as the lead was just three points heading into the last five minutes.

Ballyfin Gaels were under the cosh, but Gareth Dunphy, so often the scorer of important points for his side, picked the perfect time to register his first from play, as Ballyfin looked to finish strongly.

Colt Gaels weren't buckling though, and Kevin Bergin hit another for them as they left a score in it, and they needed a goal now. Ballyfin Gaels hadn't long to hold on, but they saw off whatever Colt Gaels could throw at them in the closing stages, and claimed a place in the Laois SHC for next year.