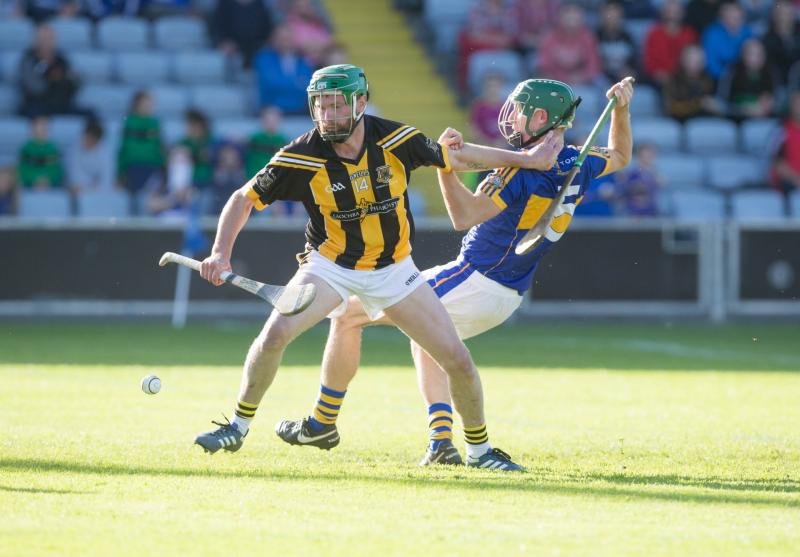 Zane Keenan in action for Camross.

Camross are the Laois SHC champions after they saw off Clough-Ballacolla by a single point after a dramatic final in O'Moore Park today.

Mark Dowling's goal in injury time looked to have wrapped up the win, only for Stephen Bergin to hit back with a goal for Clough-Ballacolla seconds later, leaving just one point between the sides with time almost up. Try as they might, Clough-Ballacolla couldn't fashion an equaliser, and Camross held on for the win.

The opening score of the game came in the second minute, as Willie Hyland pointed a free in a bright start for Clough-Ballacolla. Camross were seeing plenty of the ball, but for all of their county final experience, they looked nervy in those early stage.

They hit three wides in the first four minutes, before exploding into life after that. Dwane Palmer was the creator, as he won the ball in the penalty area and laid it off to Niall Holmes, who hammered a shot into the top left corner of Danny Hanlon's net. Ciaran Collier added a point moments later, and Camross were up and running.

Mick McEvoy responded for Clough-Ballacolla with a lovely score from the right wing, but Camross were starting to settle now, and hit back with interest. Dean Delaney pointed from out near the left sideline, and then Gearoid Burke launched one over from distance, pushing his side four ahead.

Robbie Phelan kept Ballacolla ticking over with a point from the right side, but Camross had the net bulging again moments later. It was Holmes and Palmer combining again, although the roles were reversed on this occasion, as Holmes set up Palmer for well-taken goal from 10 yards out.

That score put Camross six ahead, but they didn't kick on from there, and instead Clough-Ballacolla knuckled down and started to reel them in. Willie Hyland pointed a free and then followed that up with a superb sideline cut from the left wing. Another Hyland free made it three on the trot, and momentum was building for Ballacolla.

Aidan Corby kept them on the front foot with a point from distance, and Hyland's first score from play moments later had the Camross lead down to just one point.

That seemed to be the stimulus that Camross needed, and they started to pick off scores again after that. Damien Keenan pointed from inside his own half, and Zane Keenan then got his first of the game not long after.

Darragh Duggan then split the posts from 40 yards after good work from Niall Holmes, before Holmes himself scored an excellent point under pressure.

The rest of the action in the half took place at the Camross end, as Willie Hyland went for goal from a 21 yard free, only to see his shot saved. His free moments later from the right wing was waved wide, despite furious protests from both him and Willie Dunphy, which resulted in Anthony Stapleton having to double-check with his umpire.

The last act of the half saw Hyland tap over a free from 30 yards, and that saw four between the sides as they headed to the dressing rooms, 2-7 to 0-9.

The second half started with Clough-Ballacolla on the front foot, as Willie Hyland hit two quick-fire points, one from a free and one from play, to leave two between them. Gearoid Burke responded with a long range point for Camross, but another Hyland free kept Clough-Ballacolla right in touch.

Zane Keenan held his nerve from a free on the right wing to open up a three point lead once again, but Lee Cleere and Hyland (free) hit back with interest. Camross were finding it hard to find an fluency, and another Keenan free was badly needed.

Clough-Ballacolla had them in their sights though, and two more Willie Hyland pointed had them back on level terms at last. Zane Keenan then missed a scoreable free for Camross before Hyland threaded a shot between the posts from a tight angle to put Clough-Ballacolla ahead for the first time since the second minute.

Zane Keenan cancelled that out when he pointed his next free, and then Hyland (free) and Dean Delaney exchanged points to keep the teams level heading into the last few minutes.

That set up an absolutely frantic end to the game, as Camross looked to have won it when substitute Mark Dowling swept a loose ball to the net just as the game ticked into injury time. Zane Keenan added a point and that looked to be that, but Ballacolla made another burst for glory.

Stephen Bergin scored a brilliant goal, and that left just a point between the sides. Ballacolla had a couple of late chances, but Camross held on to secure their 25th Laois SHC title.