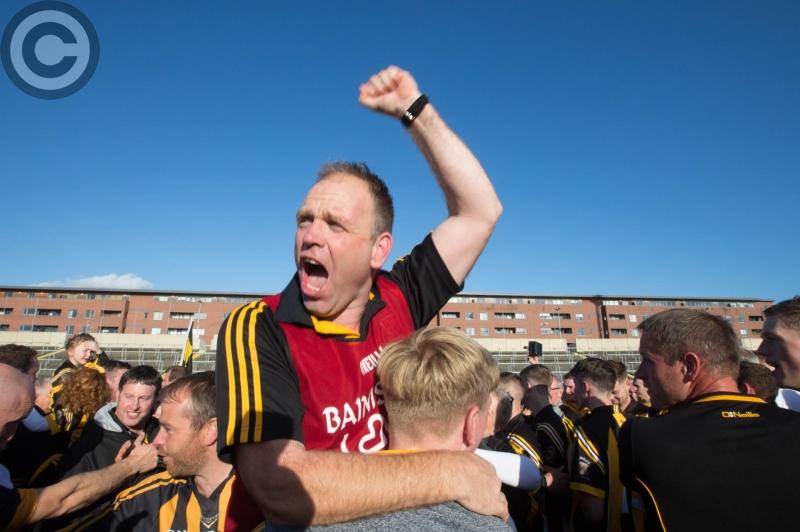 Camross manager Arien Delaney paid tribute to teenager Mark Dowling, after the sub scored the all-important goal which proved to be the match winner on Sunday.

Dowling's goal in the final minute of normal time gave Camross the leeway they needed to take the Bob O'Keeffe Cup home for the 25th time, and Delaney was full of praise for the youngster after the game.

“He's an unbelievable talent, he was so close to starting. I said to him before the match that he'd be there at the end, and by God was he.

“He comes from a great family of hurlers, but on his mother and father's side, and he's an outstanding talent, level-headed, and the nicest chap you could meet, and I'm absolutely thrilled for him.”

Delaney was understandably delighted after the final whistle, as he won his second SHC title with the club in his fifth year at the helm.

He had walked away after the 2016 season, his term as manager having come to an end, but after an appeal from the players, he agreed to stay on.

There was a sense of unfinished business in the Camross camp, and Delaney admitted that the loss to Clough-Ballacolla in 2015 played its part in their preparations for this game.

“To be honest, we used 2015 a little bit, for ammunition, and I suppose lads were saying to us about the league and the Palmer Cup, but I'll be straight with ye, it was great to win them and all, but we only had our eye on one thing, and that was today.

By returning for a fifth year in charge, from the outside at least, there appeared to be that bit more pressure on Camross this year, as they went all-out in search of another Laois SHC title. While that may have been the impression to those of us on the outside, Delaney was emphatic in his answer when asked if there was more pressure on the team this year.

“No, we put no pressure on ourselves, this is the pressure we have every day. When you represent Camross, you go to play, and you play to win, and we're used to that, so we don't mind, there's no pressure. Pressure's only for a football, and maybe the odd balloon, or a car tyre!”

The win here also rounds off what may possibly be the best year in the club's history, as they enjoyed success at U-10, U-12, U-17, Minor and Camogie before adding the SHC title. “From U-12s and U-10s, Minors, U-17, Camogie, this club is a credit and it has been a brilliant year.

“We told them in July that we were shaping that way, and in fairness they listened, and they reaped the rewards.”

It's off to the Leinster Club SHC now, where Camross are the only Laois side to have ever won the competition, and Delaney is acutely aware of the prestige the competition holds in the club's history. “That's a tradition that we hold proud and hold dear.