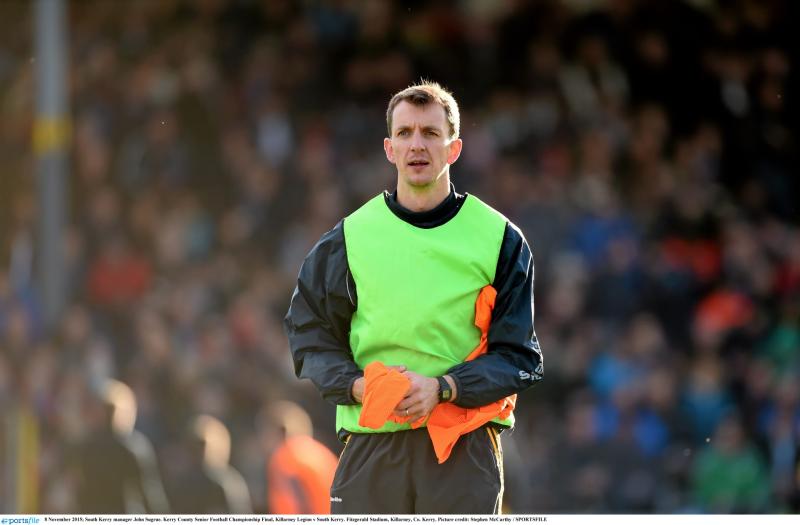 John Sugrue on the line with South Kerry. Pic: Sportsfile.

John Sugrue was confirmed as the next Laois senior football manager at last night's meeting of the Laois County Board. Here, we take a look at the man entrusted with revitalising the fortunes of the county's senior football team.

The chances are that most Laois football supporters will have seen John Sugrue multiple times, without ever really noticing him. As a highly regarded physiotherapist, he has been working with the county's senior hurlers and footballers for a number of years, and is a regular on the sideline in O'Moore Park.

Now he is swapping his physio bib for the 'Bainisteoir' one, and while the transition may seem a little unorthodox, it is perfectly natural where Sugrue is involved.

A native of Renard, a small coastal village in the southwest of Kerry, he was raised in Kerry's football heartland. A five or ten minutes drive in either direction brings you to the homeplace of men like Mick O'Dwyer, Maurice Fitzgerald, Jack O'Connor, Mick O'Connell and countless other Kerry greats, so football is in the blood.

While his working life eventually took him to Portlaoise Hospital as a physio, his playing career also brought him into contact with Laois. He was midfield on the Kerry minor team which lost to Laois in the 1996 All-Ireland final.

Three years later, he was back in an All-Ireland final at U-21 level, when they lost to Westmeath. That Kerry team featured future senior stars Paul Galvin, Tomás O Sé, Mike McCarthy and Aodhán Mac Gearailt, as well as Noel and Tadhg Kennelly.

He made one appearance at Junior level, in a Munster semi-final win over Cork, but his intercounty career did not extend to senior level. He remained loyal to his South Kerry roots though, and even as his college, and then work, commitments brought him around the country, he continued to line out with them in the club championship.

That loyalty was rewarded with three championship victories in as many years, between 2004 and 2006, and then another in 2009; he was Man of the Match in the 2004 win over Laune Rangers. They were beaten in the 2007 final, funnily enough by a Feale Rangers team managed by Jerome Stack, who Sugrue has recruited as part of his management team.

The combination of those two men has caught the attention in Kerry, and we spoke to Kerry's Eye reporter Sylvester Hennessy about the new Laois management team. "John Sugrue would be very highly regarded" revealed Hennessy.

"He is very thoughtful on the game, is very professional, and he will do a very good job. Jerome is also very highly regarded, he managed Feale Rangers to a county title back in 2007, and he has a lot of intercounty experience."

"There will be nothing rough and ready about the setup, I am sure of that. They are both deep thinkers on the game, intelligent and educated men. There won't be any bullsh*t and they are not loudmouths or anything like that either, they are good guys and I think they will do well with Laois."

Sugrue's working life certainly points towards high performance, where his reputation as a physio has seen him work with both Laois senior football and hurling teams, the Clare senior hurling team, the Kerry senior footballers, as well as a number of Irish international boxers and athletes.

In conjunction with that, he has been working as a coach, and was part of Pat O'Shea's back room team as physical trainer when Kerry won the All-Ireland back in 2007.

Having previously been co-owner of the Killarney Physiotherapy and Sports Science Clinic, he left that practice in 2011 to set up the Laois Physiotherapy Clinic. He transferred to Park-Ratheniska GAA club where he played for a few years, before returning to South Kerry as manager in 2015.

The year before, they had lost to Shannon Rangers by ten points in the quarter-final of the club championship. Seen as a team on the slide, Sugrue revitalised the seven-club amalgamation and brought them back to the county final, where they defeated Killarney Legion in a replay. Incidentally, that Killarney Legion team were managed by Peter Keane, who recently lead Kerry to a fourth minor All-Ireland title in a row.

Brendan Delaney, who will act as a selector with John on his Laois management team, was also part of the South Kerry management team which claimed that 2015 success.

Since coming to Laois, he has gotten involved with the county development squads, and his work as a physio means he is well known to the players. After Mick Lillis stepped down in 2016, it was rumoured that the players wanted Sugrue to be appointed as his replacement.

Time constraints are thought to have ruled him out on that occasion, as he runs his own business, has a young family, and was in the process of building a house last year too.

The landscape had changed when the job came up this year, and at Monday night's county board meeting, chairman Gerry Kavanagh revealed that Sugrue was very clear in his plans for the future. "He impressed on us that there is no quick fix, there has to be a rebuild of the team and to develop a team.

"He has very comprehensive views on how that should be done, and what it needed to bring it about."

A tough job awaits for Sugrue, but with a good knowledge of the Laois club scene, the underage scene, and what is needed to perform at the highest level in sport, the county's senior footballers look to be in safe hands.