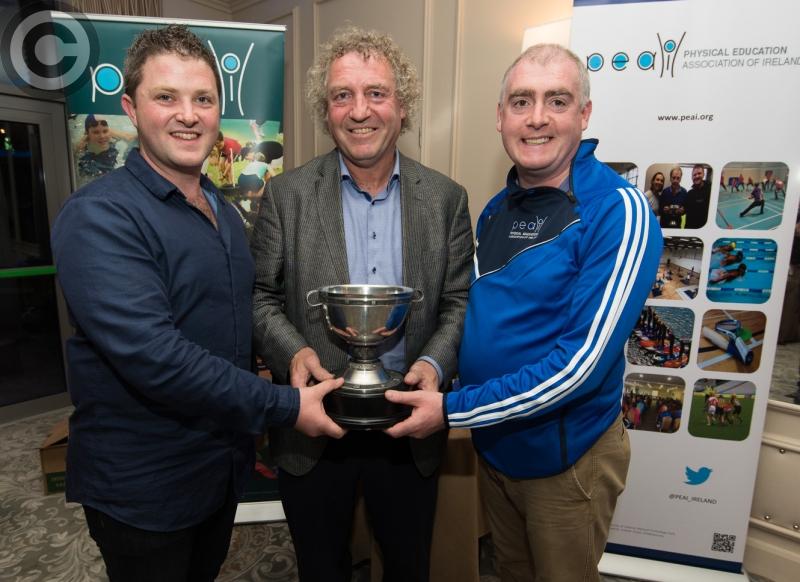 Pat Critchley received his award for Outstanding Contribution to Physical Education at an awards ceremony in the Killeshin Hotel on Friday night.

The award, named after Michael Dermody, an inspector with the Department of Education, was first introduced in 2011, and is given to a PE teacher who has achieved excellence in their career. Pat retired over the summer after 32 years on the staff of Scoil Chríost Rí in Portlaoise, during which time he coached countless teams to regional, provincial and All-Ireland titles, while also administering a PE programme to cater for all students abilities.

A testimony was read on the night by Scoil Chríost Rí Head Girl, Maeve Phelan, while the night was also attended by a number of Pat's colleagues from the school.

Below is the testimony which was composed to honour the great man, by those who nominated Pat.

"It is difficult to put into words the profound effect Pat has had on the lives of the students and staff in Scoil Chriost Ri.

"He is first and foremost a role model of resilience, integrity and virtue. He has dedicated his life to the promotion and delivery of physical activity.

"As a Physical Education teacher he has lead the development of a Physical Education programme in Scoil Chriost Ri that is highly inclusive, progressive and challenging for all the students in the school. He firmly believes that everyone can achieve success in physical activity regardless of their starting point.

"His relationship with young people is unique. Pat garners respect with the small encouraging words and he is a role model in the humble manner. This garners the utmost respect from his students.

"Pat is admired and loved for this gentle positive approach to motivating, problem solving and challenging every individual to reach their potential.

"Pat is regarded with the utmost regard among his colleagues. Pat was an expert at staff induction and inclusion. He recognised and enjoyed the important social life of staff outings - indeed he was part of planning most of them.

"Pat always worked for the best interests of the school and was rightly placed on the school planning team for his vision of education at Scoil Chriost Ri. He is a big ideas man, with great vision and he models and guides people through his vision.

"From a Physical Education curriculum perspective, Pat introduced the Australia games curriculum to the PE programme. Though he was an avid Basketball/Football coach he recognised that PE was for all and not solely a place for competitive sport.

"He embraced the variety of the PE syllabus and he taught all strand of the curriculum with expertise. The fun, engagement and learning has been witnessed on many occasions in the Nano Nagle Sports Centre.

"Pat has guided teachers in their work, leading the extra-currciular team and playing a leadership role in the senior management team. Pat we doubt if you will ever truly retire. To be honest, we hope you never do!

"Pat, thank you for your outstanding contribution to Physical Education in Ireland. In recognition of this contribution, we are awarding you the Michael Darmody Award."