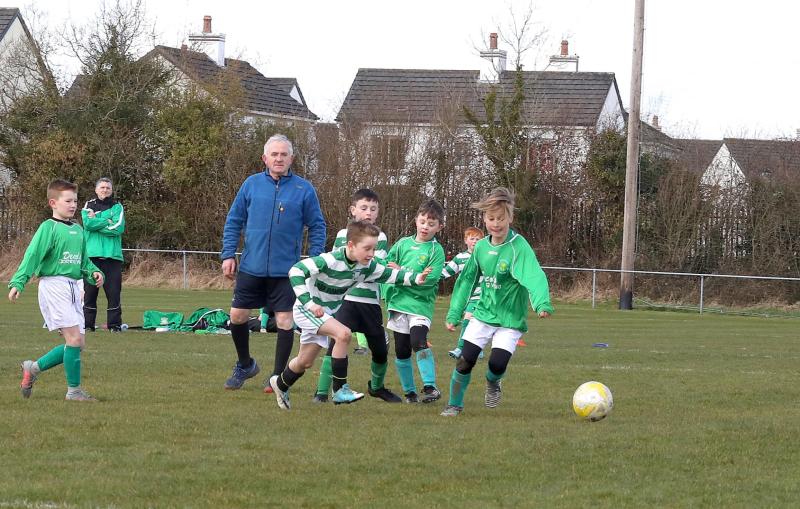 Action from the Portlaoise U-10 derby on Saturday.

Rossleighan Park played host to the fourth, and final, chapter of the season's most thrilling and intense U-10 soccer rivalry, as Portlaoise Athletic hosted Portlaoise United in the second leg of their U-10 Shield Round 1 tie.

Given the honour of playing on the main pitch, once again both sides served up an instant classic in front of an enthralled crowd.

Trailing 2-1 from the first leg, Athletic knew they had to win, and they set out their attacking stall from the off. Led by the ever impressive Dawid Nowodka at the back, they played the ball around confidently and looked to create space out wide at every opportunity.

United were not going to surrender their advantage easily, however, and some superb play from Leah Brennan and Danny Gavin thwarted the Athletic attacks.

The key moment of the tie arrived in the seventh minute. From a long range free kick out on the United right, Ross Dunne's speculative effort went all the way to the back of the net for a 3-1 aggregate lead.

Far from being dejected, however, the Athletic boys came roaring back. Scott Lenihan and Ben Peacham were a handful out wide, and it was these two who combined with Jan Gdowski to tee up Cian Fitzpatrick who fired home the equaliser on the day to the bottom corner.

Athletic were flying at this stage, with only the half time whistle putting a stop to their momentum.

The second half was another exhibition of quality play from both sides. While United created a number of chances that would have ended the tie, it was Athletic who threatened to break the deadlock more often.

Nowodka and Gdowski both had chances, and Harry Browne was in inspired form for United to keep them at bay. Tom Coleman and Rhys Lawless were able to bring the play back into the Athletic half on a regular basis, with Ryan Keane, Holly Murphy and Gary Brennan ensuring that chances for Athletic were kept to a minimum.

With time ticking down, Athletic threw everything they had at the United rearguard and did everything but score. In the end, the clock just about saved United and there were jubilant scenes in their camp as the final whistle went.

It was a shame that there had to be a loser in this tie, but that is cup football and both sides will take a lot from the outcome. Once again both sets of players and management deserve great credit for the quality of football on show and the spirit in which the game was played.

United manager Mick Coleman had some great words of encouragement for the visibly distraught Athletic players, while Athletic manager Darach Kennedy was quick to wish United well for the rest of the competition.

The work being done at u10 level in the club has been immense, with a third outfit, David Powder's Portlaoise Town, also in great form as they look forward to their cup campaign.

There is no doubt that many of the players on show will grace the main pitch at Rossleighan on a regular basis in the future.