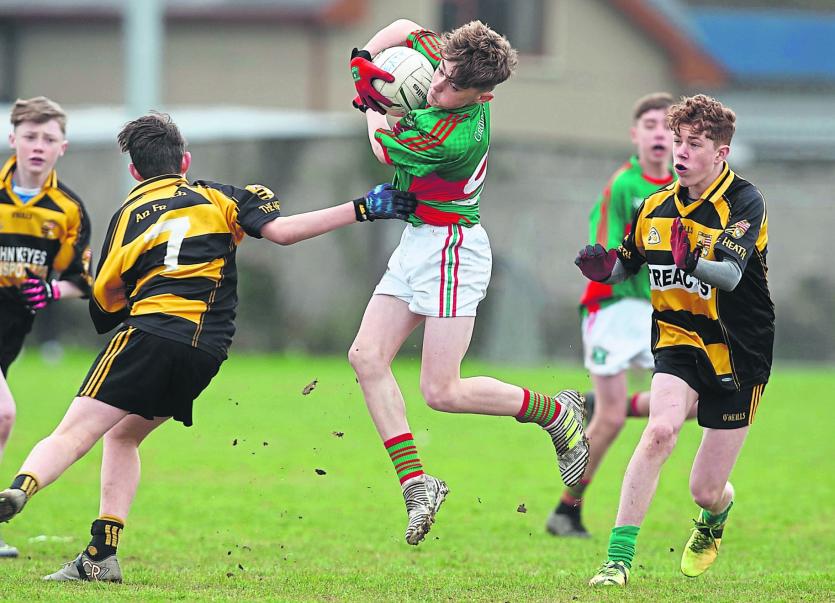 Aaron Dorgan on the attack for Graiguecullen in the Feile B football final at Laois Training Centre. Picture: Alf Harvey.

Graiguecullen put in an impressive display to claim Laois U-14 ‘B’ Féile honours, with Jamie Murphy racking up 3-4 on the day.

Jamie Murphy began with a thunderous strike past Dylan Keyes in the opening minutes to get Graiguecullen motoring.

Midfielder Jack Byrne placed over Graiguecullen’s opening point soon after. Byrne was involved once again minutes later, as his shot came back off the crossbar, but fell into the grateful arms of Dylan Murphy, who slid it past Dylan Keyes for Graiguecullen’s second.

Jamie Murphy added on a further three points to increase Graiguecullen’s lead further, two from placed balls and one from play. He then scored his second goal, looping the ball over Keyes, before finishing the half with another pointed free.
The Heath finally got some reward from the game with a Ben Doyle point. This was met by Jamie Murphy’s hat-trick goal, after Aaron Dorgan played a quick 45’.

The Heath responded with a goal themselves, Mikey Daly firing in an unstoppable shot. However, that was as good as it got for The Heath, as Graiguecullen kept the scoring going, finishing comprehensive 6-7 to 1-1 winners.