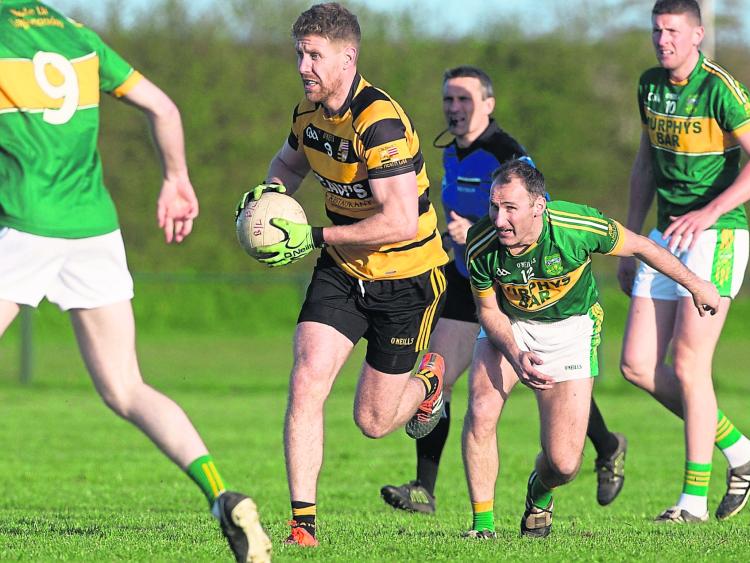 Denis Booth on the attack for The Heath in the ACFL at Ballylinan. Picture, Alf Harvey

The Heath picked up their second win in ACFL Division 1 thanks to this routine victory over Ballylinan on Saturday evening down in Ballylinan.

The home side never really offered much of an opposition to The Heath, who got their noses in front in the first half and just pulled further and further ahead over the remainder of the game.

Ballylinan had actually opened the scoring, as a Gary Walsh free gave them the lead for the first, and only, time in the game. It was cancelled out almost a minute later thanks to Daithi Carroll slotting over a free for The Heath, and then PJ Daly put the visitors in front after being set up by James Phelan.

Carroll landed another free just before the midpoint of the half as The Heath went two clear, and they started to build some momentum now. Andrew Booth, on as a sub for the injured Padraic Whelan, had a productive couple of minutes, as he pointed twice and also saw a shot for goal cannon back off the post.

Daithi Carroll soon added his third point of the game, this one a delightful effort off his left foot from play, as The Heath now lead by five. James Farrell offered a brief riposte for Ballylinan, but The Heath kept powering ahead.
Robbie Dowling was fouled and Daithi Carroll applied the finish to the free, and then a good run by James Phelan set Chris Bergin up for another Heath point.

The final score of the half came in injury time, as another foul on Robbie Dowling saw Daithi Carroll land yet another frees, and The Heath lead 0-9 to 0-2 at the interval.

There was only one score in the opening 20 minutes of the second half, that going to The Heath's James Phelan. Cieran Farrell pointed in the 51st minute for Ballylinan, but Andrew Booth replied with interest as his goal opened up a ten point lead.
Gary Walsh offered a glimmer of hope for Ballylinan with a goal for the home side, but another Heath sub, Eoin Delaney, wrapped up the win with their second goal, with another Daithi Carroll free confirming a ten point win for Barry McNamee's side.