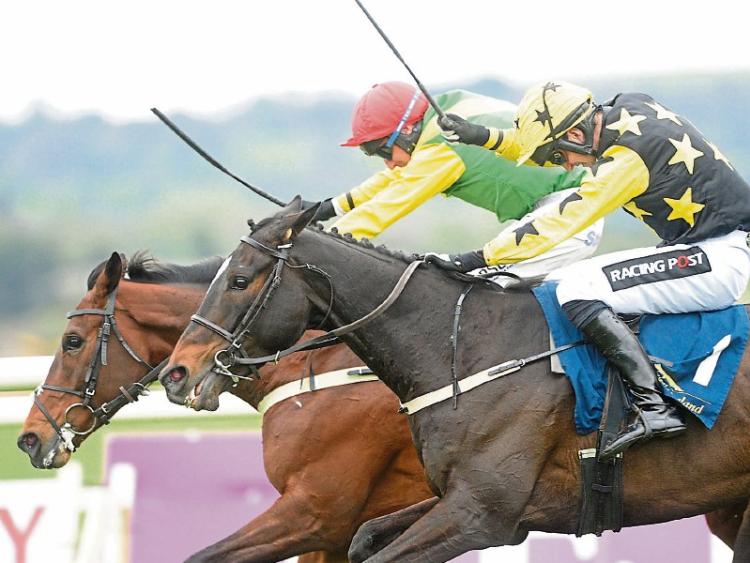 As Gordon Elliott closes in on the Irish Trainer's Championship title and Willie Mullins guns to hunt him down, the stars of Irish National Hunt racing gather this week for the 2018 Punchestown Festival. Aintree's three-day festival earlier this month attracted fewer Irish raiders than usual as both Mullins and Elliott held all their aces for the Irish showpiece. Our man has run his eye over the card for Day 1, Tuesday, April 24, and here are his selections:

Last year's winner of this, Enniskillen, returns, but the nod goes to BLUE TEMPLAR (5/2), who was third here last season. He'll have the company of top amateur rider Derek O'Connor in the saddle and has had a couple of good prep runs for this. He was a good third behind Auvergnat at this track and on April 1, ran well to be third in a point-to-point. The re-opposing Tippinawaynow was 12 lengths ahead of him that day but Enda Bolger's charge carried ten pounds more on that occasion. Blue Templar was also tanking his way into the Cross Country race here last year looking like a challenger when he slipped up on the final bend. He will be primed for this and could get punters off to a flyer this time around.

Given the form Gordon Elliott is in, it is not beyond the realms of possibility that MENGLI KHAN (4/1) can topple odds-on favourite Getabird here. Getabird bombed out in the Supreme Novices Hurdle at Cheltenham but appeared to have excuses as the horse prefers going right handed. He proved a cut above the field at Fairyhouse over Easter, and many of those chasing him home that day return to re-oppose here. However, Mengli Khan was a good third behind Summerville Boy in that Supreme Novices Hurdle at Cheltenham last month, form that worked out very well at Aintree. When Getabird beat him by nine lengths on this track in January, Mengli Khan was tasked with carrying six pound more. He also made a mistake at the last which saw him land flat-footed for the run-in. It is fair to say that he was well held by Willie Mullins' charge that day but that rival showed enough frailties at Cheltenham to suggest he's far from unbeatable. Paloma Blue can also get involved back on ground he'll enjoy having been fourth in the Supreme.

Jessica Harrington always enjoys Punchestown and she saddles LIGHT THAT (20/1) in this once more. He carried far more weight and still managed to finish second to Western Boy in this race last year, and can go well again now after a quiet couple of months. He hasn't been seen since finishing third behind Saturnas at Fairyhouse in January, but a break could prove to be a positive. He goes well fresh and once again proved he likes this track when finishing second behind Bon Papa last November. He won't mind the ground and is consistent enough to run into the frame.

The undoubted highlight of Day 1 is the Champion Chase which sees three of Willie Mullins' stable stars meet for the first time. Min, Douvan and Un De Sceaux will more than likely have the market and the race between them as the rest scrap for minor honours and moral victories. Min seems the easiest to discount after coming up just short at both Cheltenham and Aintree. Douvan was travelling well when he fell four out in the Queen Mother Champion Chase won by Altior, and although there was a long way to go, it looked like he was shaping towards a big run. While Un De Sceaux won easily at Fairyhouse last time out, he found very little when challenged and beaten by Balko Des Flos at Cheltenham. After all that, the risk is taken on DOUVAN (6/4) to recapture his form to continue his record of never being beaten at Punchestown.

This is a race of mostly newcomers and relative unknowns, so the vote goes with top connections and COMMANDER OF FLEET (4/1), who could be just a bit special for Gordon Elliott and Gigginstown. He has a run under his belt and is well bred by Fame And Glory. It's a puzzle to work out, but both Elliott and Mullins have strong hands in the race and could well have it between them. Think Positive, That's A Given and Column of Fire are others to take very seriously.

This will be a cracker but it could be worth sticking with the current favourite MONALEE (7/4). With Gold Cup talk surrounding Presenting Percy, this horse's form with Pat Kelly's star at Cheltenham is reading very well. That looked a solid running of the RSA with third and fifth placed Elegant Escape and Black Corton going well at Aintree and the fourth-placed Ballyoptic going within a nostril of winning the Scottish Grand National since. Monalee also beat plenty of these rivals at Leopardstown in February, and could have too much class for them again. I'd count Invitation Only and Shattered love as perhaps the greatest dangers, while Finiian's Oscar is an intriguing British raider fresh from a win at Aintree.

Another near impossible race to decifer with a host of debutants but a tentative nod goes to GRAND MOGUL (12/1) for Gordon Elliott. The Meath handler has a number of entrants in this race, and perhaps some are more well fancied, but the fact that he's had the presence of mind to put a five-pound claimer on this fella, and the horse is well bred by Presenting, are good enough reasons to pick him out. He may not be good enough to win first time out but it is favourable ground conditions and he could run into a place. Adulterated and Final List are also worthy newcomers for Elliott but won't be as well priced for casual punters.