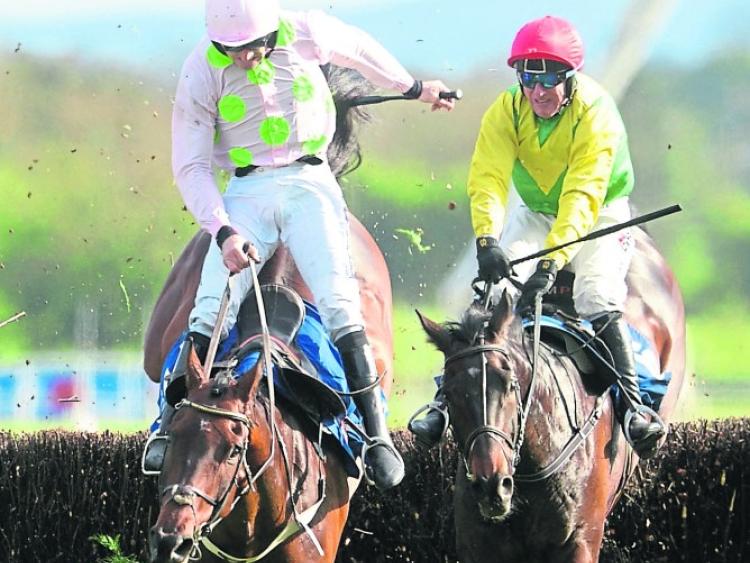 A huge field perfect for each-way backers. Mullins and Elliott head the market again but I'd be inclined to go with Jessica Harrington who has hit the crossbar on a few occasions already this week. NEVERUSHACON (14/1) will be piloted by Robbie Power and although his recent form is below par, he's very often shown his best at this track. He was third behind Don't Touch It in a decent chase at this festival last year, and while he's only won once over hurdles, he's at an exploitable mark. The ground shouldn't be an issue and at odds of 14/1, he's a solid each-way shout.

Willie Mullins can get another winner in the race to be champion trainer here in the shape of BON PAPA (6/1). This horse wasn't sent to Cheltenham and so comes here fresh from finishing a good second to Bel Ami De Sivola at Fairyhouse at Easter. That form was good, as was his run to be 15 lengths behind RSA runner-up Monalee, and that to be 17 lengths behind JLT winner Shattered Love in earlier starts. He also has a win over Light That in the book, and that lightly raced Jessica Harrington runner ran brilliantly to place in a big handicap here on Tuesday. Bon Papa's form has been franked all round and he could be a step above here.

The La Touche on Day 3 is always a fantastic betting heat, and fresh from finishing a brilliant third in the Aintree Grand National, veteran 13-year-old Bless The Wings returns to the banks of Kildare where he'll be popular for Gordon Elliott. However, I'd have to side with a trainer who is so often the master over these cross country fences in the shape of Enda Bolger. Auvergnat is a consistent sort for Bolger but he's been handed a huge weight, bringing another Bolger runner, JOSIES ORDERS (5/2), firmly into the frame, and he gets the vote. Nina Carberry will take the ride on a horse that finished just a short-head behind Auvergnat at this track in February. He carried two pounds more than his stablemate that day but will carry a full stone less than the same rival here. Nina is a master at Punchestown and with softening ground no issue, the smart money has to be with Josies Orders.

PENHILL (2/1) should be shorter and will most likely be snapped up by punters on track on Thursday. He was a sensational winner of the Stayer's Hurdle at Cheltenham, staving off the attentions of subsequent Aintree runner-up Supasundae. It's fair to say this lightly raced seven-year-old was a surprise winner of the Albert Bartlett at the 2017 Cheltenham festival where he beat Monalee, but the Stayers win this year more than confirmed his class. His only run in between those two Prestbury Park successs came here last season when he was second behind Champagne Classic in the three-mile novice hurdle won by Next Destination this year. On that occasion, the likes of Monalee, Al Boum Photo and the incredible Presenting Percy were behind him. His form is rock solid, the ground is perfect, and 2/1 is a steal.

Henry De Bromhead could spring a little bit of a surprise here with the lightly raced DICEY O'REILLY (14/1). He flattered to deceive slightly on his most recent run as he slumped to fifth place behind Tower Bridge at Leopardstown but his form before that is starting to read very well. The maiden hurdle he won at Leopardstown in December looks very strong in hindsight. He won at his ease by three lengths to Mortal, but further back in that field was Someday and Ballyward. Someday was 13 lengths second to Next Destination in a hurdle at Naas last November, and that horse was third behind Samcro at Cheltenham and a winner over three miles in a Grade 1 here on Wednesday. Ballyward, who was also behind Dicey O'Reilly that day, was fourth to Next Destination in that Grade 1 on Wednesday and fourth behind Kilbricken Storm in the Albert Bartlett at Cheltenham. That form stacks up really well against the rivals Dicey O'Reilly is facing today, making his mark and his odds of 14/1 look rather generous.

There's no value in Footpad at 1/3 here but he is the undoubted class in the race and should win comfortably. The trick here is to find the forecast, and I think PETIT MOUCHOIR (5/1) can follow Footpad over the line for second place. You can back the forecast at 2/1 and that looks decent considering Petit Mouchoir already has good form with Willie Mullins' star. He was third when Footpad was a runaway winner of the Arkle at Cheltenham, and was second to the same rival in a novice chase at Leopardstown in February. None of the other horses have quite the same level of form and so these two could come away from the field before Footpad asserts to win by five or six lengths.

The fact that a horse representing the Gordon Elliott/Davy Russell combination is 20/1 for this race is surprising, but despite the price, MOONLIGHT ESCAPE (20/1) is far from a no hoper. If you look at her form with the favourite, Moyhenna, who is 4/1, the odds look particularly generous. The pair met at this track in January on heavy ground, and with the ground softening all the time at Punchestown, conditions won't be dissimilar today. On that occasion, Moyhena had just a length to spare over Gordon Elliott's filly. Since then, Moonlight Escape has put in performances of varying levels. She was nearly forty lengths behind Shimmer's Rock, but then came back to win at Cork over Easter. She unseated in her most recent performance, and that has probably dimmed the memory of that Cork win for backers. However, it was a good win on soft to heavy ground that once again confirmed her comfort on a bottomless surface. With a master onboard today, this 20/1 shot could land Elliott back in the winner's enclosure.

Stick with the favourite here in the shape of GETAREASON (13/8), an undoubted star of the future for Willie and Patrick Mullins, a pairing that very often combines for victories in these races. Willie's horses ridden by son Patrick have won this contest in two of the last three years thanks to Invitation Only and Yorkhill, two horses who turned out to be well above average. Getareason has had the ideal prep for this with a comfortable four-length win over Ruthless Article at Downpatrick in March. Mullins has seven in the field, but none of them make more appeal than the selection.