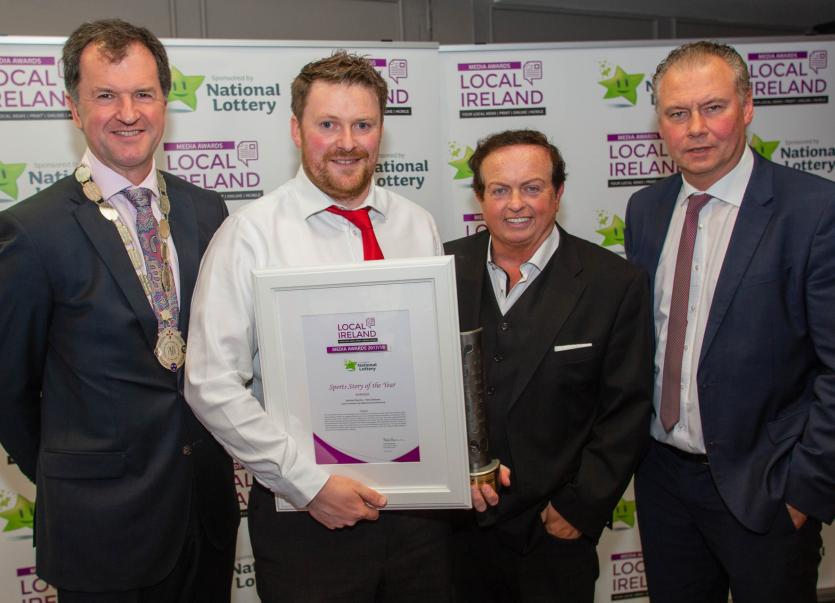 Delaney was selected for the award, which was sponsored by the National Lottery, for his story regarding the Laois Cumann na mBunscol controversy from 2017, when it emerged Castletown NS has fielded players from their 'A' team in the final being contested by their 'B' team.

he story ended up gaining national prominence, and lead to the resignation of the Chairperson of Laois Cumann na mBunscol, who was principal in Castletown NS.

The award ceremony took place in the Radisson Blu Hotel in Athlone on Thursday night, with the judges citation for selecting the story reading "It's hard to take a stand in a local paper, even in the face of an obvious wrong. Here, Rory Delaney called out an egregious failure to engage with the spirit of an underage hurling competition and exposed sharp practice by one of the schools involved in putting out a stronger team than they were supposed to.

"The team involved won the game but because of Delaney's stance, they were subject of national exposure for the behavious of adults in charge and as a direct consequence, the chairperson of Laois Cumann na mBunscol had to resign. The broader story is, of course, the ridiculous need to win on the part of people who should know better when the kids involved are still in primary school. Rory Delaney did everyone a huge service in exposing this to ridicule."

Speaking of the award, Delaney said. "When you write a story like this, you never really know how it will be received. I certainly didn't expect it to have the impact it did, and reach as many people as it did, but if it proved to be a starting point to a discussion people felt was necessary, then that is as much as you can hope for with anything you write."

The Local Ireland Media awards are in their third year, and are sponsored by the National Lottery. They recognise the work of local newspaper around the country, and present awards in areas ranging from news and sport, to features and advertising.