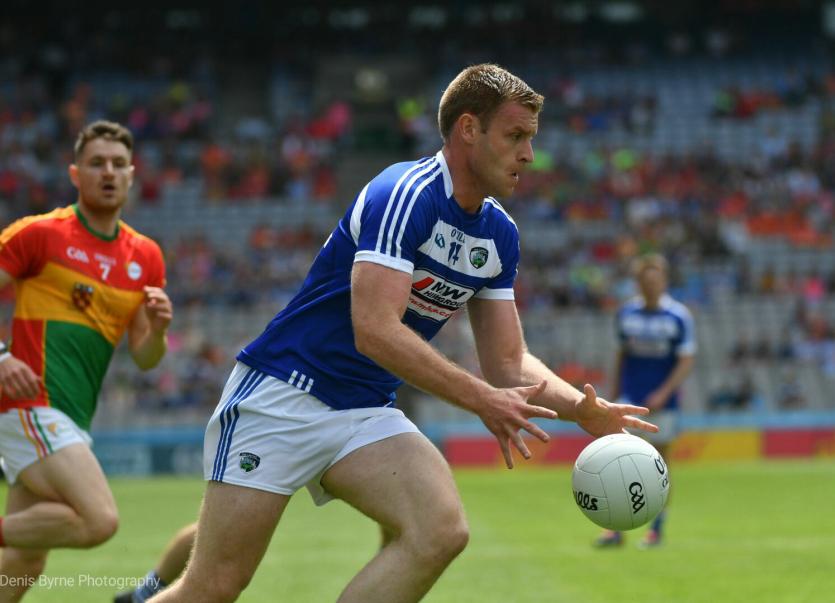 The Laois Senior footballers booked their place in the Leinster GAA final in for the first time since 2007 following a four-point win over Carlow in Croke Park this afternoon.

It took until the fifth minute in Croke Park for Laois to open the scoring against an ultra-defensive Carlow side that already had no players in the opposition half inside the first two minutes. Niall Donoher was fouled twenty metres out, and Ross Munnelly converted from straight in front of the posts.

Having hit no wides against Kildare last time out, Carlow fired two in the opening ten minutes - with Hawk Eye required to decide their first wide, and also Laois’ from an uncharacteristic Munnelly wide.

Donie Kingston fired Laois’ first from play with a beautiful instinctive point over his shoulder to double the Laois lead with fourteen minutes on the clock. Carlow opened their account a minute later through Diarmuid Walshe floating score.

Colm Begley marauded forward twenty-two minutes in to restore Laois’ two point lead, but Carlow responded well with Jordan Morrissey being hauled down just outside the square and Broderick converted to leave one in it again.

Alan Farrell and Finbarr Crowley got in on the scoring to give Laois a three point lead ten minutes before the break. Ross Munnelly was dragged down on the half hour mark before converting the free himself.

Darragh O’Brien jigged through the Laois defence to pull one back for Turlough O’Brien’s men. Carlow’s Diarmuid Walshe had a goal chance snuffed out just before the interval as Laois went in 0-6 to 0-3 ahead.

Laois kicked three wides in the two minutes directly after the restart. Carlow reopened the scoring seven minutes in with a close-range Broderick free, and three Carlow wides later they cut the gap to the minimum again through Broderick.

Laois finally reopened their account fifteen minutes into the half when substitutes Evan O’Carroll and Brian Glynn combine to see the latter split the posts. Broderick replied almost immediately to bring it back to a one point game with just under twenty minutes remaining.

Laois pushed their lead out to three compliments of a super outside-of-the-boot point from Donoher followed by a Kingston free after Evan O’Carroll was hauled down ten minutes from time.

Donie Kingston and Broderick traded points, before late points from John O’Loughlin and Evan O’Carroll sandwiched a Darragh Foley free as Laois held out to book their place in the Leinster Final!