A thrilling finish for Arles-Kilcruise and Ballyroan Abbey 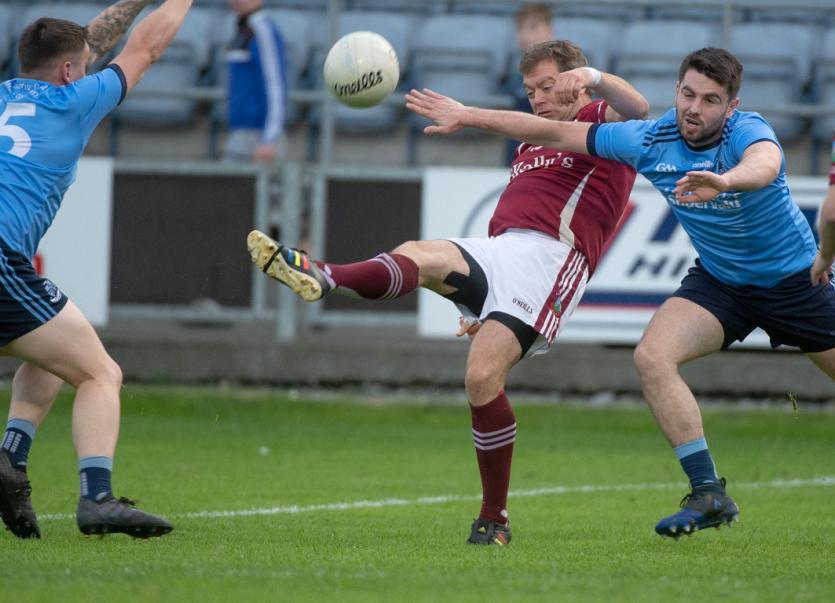 Arles-Kilcruise and Ballyroan Abbey will go to blows once again as they finished level after sixty minutes in a thrilling, and controversial finish in O’Moore Park on Wednesday evening.

Arles-Kilcruise and Ballyroan Abbey will go to blows once again as they finished level after sixty minutes in a thrilling, and controversial finish in O’Moore Park on Wednesday evening.

Spectators were treated to a tit-for-tat game, value for money and an eventful evening in O’Moore Park for this third round clash. Injury-time points from Francis Egan and Ross Munnelly salvaged a draw for Lar Wall’s men in what was a fiercely contested game throughout.

Arles-Kilcruise opened the scoring two minutes in when Chris Conway pivoted on the 20-metre line before squeezing his effort inside the upright to set them underway. Ballyroan Abbey were level two minutes later when Diarmuid Whelan was hauled down en route to goal before standing up to kick the conversion himself.

Scores were proving hard to come by for both sides as a ten minute scoreless period followed. Kilcruise were dealt a blow as David Conway was forced off with a head injury in the twelfth minute - dropping Marty Scully with a shoulder as he departed before eventually picking up a yellow card half-way down the tunnel - and not returning until the fifty-second minute.

Arles-Kilcruise broke the deadlock with a close-range free from Munnelly, with midfielder Kevin Meaney following to force a fingertip save from Andrew Bonham to tip his effort over the crossbar. Munnelly popped over his second free of the evening and Dermot Nolan steered one over as Kilcruise went four points clear with half-time approaching.

Ballyroan Abbey replied with a major, Padraig McMahon storming through the Kilcruise defence before rolling the ball past the oncoming Colm Munnelly to bring it back to a one-point game with five minutes to go until the whistle.

Kilcruise got back on top before the break with Munnelly swinging over two points, one off of either foot, but an injury-time MJ Tierney free closed the gap to two points. Diarmuid Whelan had an opportunity before the half-time whistle, but his goal bound effort blazed just wide of the left post as the gap remained two points at the interval.

Ballyroan Abbey claimed the opening two points after the restart to wipe the slate clean. Scully’s bombing run resulted in a free from the twenty-metre line which Tierney duly slotted, and full-forward Scott Conroy instinctively split the posts to level the sides. Munnelly replied almost instantly for Kilcruise, but Ballyroan Abbey were back on level terms a minute later when Murphy claimed the kick-out and picked out Conroy to slot his second in as many minutes.

Caomhan Brennan lifted a white flag to push Kilcruise ahead, and Padge Conway brilliantly snuffed out a definite Diarmuid Whelan goal that was recycled over by Jamie Whelan to bring them back square. Conroy curled over his third of the evening to edge Ballyroan into the lead for the first time in the game with forty-five minutes on the clock.

Munnelly and Whelan (2) exchanged frees as Ballyroan led by two entering into the final ten minutes. Kilcruise dismantled the Ballyroan lead through Francis Egan and a sweetly-struck free from Munnelly. Ballyroan re-took the lead through a Tierney free a minute from time, and a fisted point from McMahon compounded their lead heading into injury-time.

Egan narrowed the gap to the minimum, before Munnelly levelled the sides with his eighth point of the game in the second minute of injury-time.

Ballyroan Abbey romped forward in search of a winner only for Marty Scully to be dragged down on the sideline beneath the stand, and a free awarded. A fracas ensued, the referee made the unpopular decision to throw-in the ball - and then the final whistle sounded.