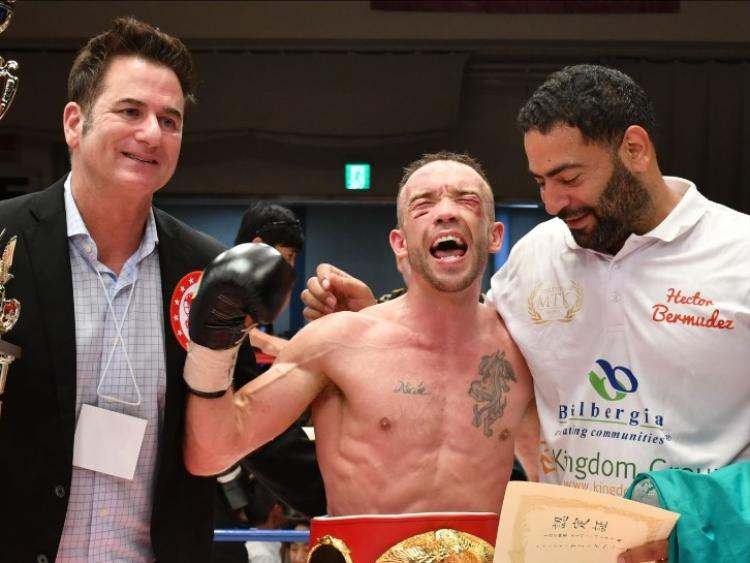 A homecoming will take place this Friday evening for Portlaoise's world champion boxer TJ Doheny, as he is honoured for his incredible victory in Tokyo last month.

Doheny will travel up Main Street in Portlaoise on Friday evening, starting at the church and working his way to the top square, before then heading to County Hall for a Civic Reception.

It promises to be a great occasion, which will get underway at 6.30pm from the church car park, with Doheny travelling in an open-top car for the duration of the parade.

TJ, who now lives in Sydney but trains in Boston, was the underdog coming into the fight, with Iwasa defending his title in a venue where he had fought all but three of his professional bouts.

However, the Portlaoise man picked off the Japanese fighter in an impressive display to take a unanimous victory.

Local sporting clubs, sports fans and the wider community are urged to come out in numbers for this Friday night to show their appreciation for his victory.

The event was confirmed at Monday's special meeting of Laois County Council, having been proposed by Cllr Catherine Fitzgerald and seconded by Cllr Noel Tuohy. Commenting, Ms Fitzgerald said. "We want to see a massive crowd. It's not every day we get an opportunity to welcome a world champion."

Cllr Caroline Dwane Stanley added. "He is not just a Portlaoise man, but a Knockmay man, and the whole of Knockmay is extremely proud."

He will become the first world boxing champion to make his way up Main Street in Portlaoise since Joe Louis, who visited the town in 1960.