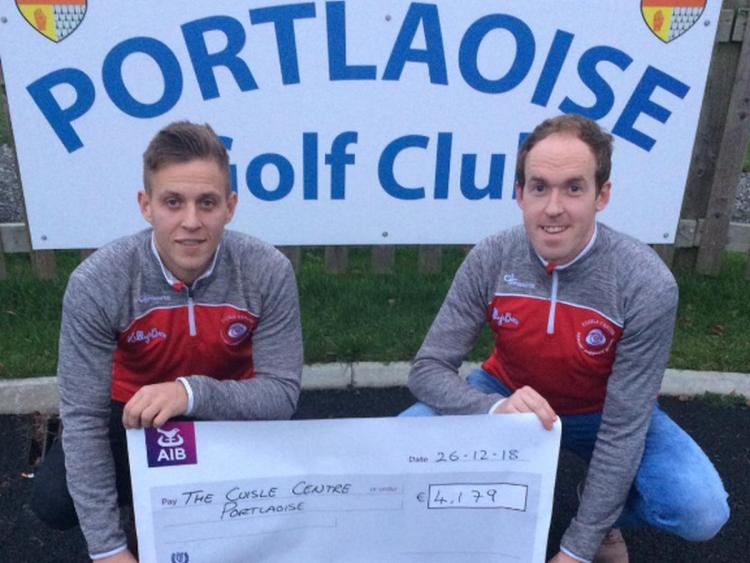 A group of 20 intrepid golfers came together at Portlaoise Golf Club over the Christmas period for their second biennial Lilly’s Bar Town Cup Charity Event, raising €4,179 for the Cuisle Cancer Centre Portlaoise.

Following the group’s success in 2016 when they raised over €3,300 for the Centre, the lads decided to run the event every two years similar to the Ryder cup.

Speaking on behalf of the group co-organiser James Furlong said,

“The Charity was first organised on behalf of one of our friend’s parents who sadly passed away from cancer. They had received great help and support from the Cuisle Centre’s wonderful staff members as did the rest of the family. We all saw the positive benefits that were readily available during such difficult times.

“Everyone who played in the event unfortunately knows someone linked to cancer so we couldn’t think of a better charity to help.

“This year Jack Fennell and I organised the whole event together. We got twenty lads to take part. The teams were based on where each person lives in Portlaoise. We basically drew a line through the town and organised ten men teams.

“Again, we would like to keep running the event every two years and it’s from the support of local businesses it’s made possible. We gave each man that played their own sponsorship card and they had to raise at least €100 to play in the event which gave us a great base to start from.

“The day was a great success and we have fundraised €4,179 so we are delighted to have beaten the figure from 2016.” he said.

The tops were sponsored by Lilly’s Bar and DS Sports. Portlaoise Golf Club also sponsored the group. Local businesses sponsored each hole on the course and organised prizes for nearest to the pin and longest drive.