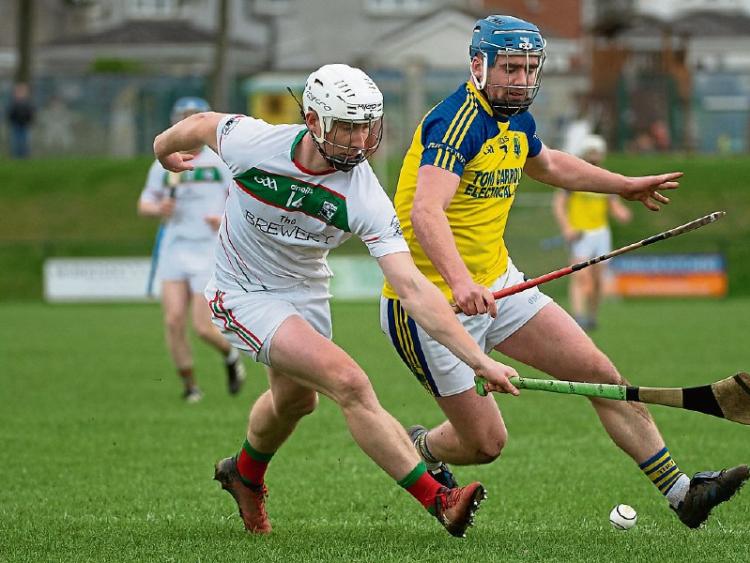 In a repeat of the SHC quarter-final last summer, the 2018 League and Championship runners-up, Rathdowney-Errill, opened their 2019 campaign with a win against St Lazarian’s, Abbeyleix on Sunday morning.

These sides last met at the quarter-final stage of the Championship last summer with Rathdowney-Errill comfortably securing passage to the semi-finals on a final scoreline of 5-23 to 0-10, a twenty-eight point dismantling, but Sunday morning in Fr. Breen Park proved to be a much different story.

The sides were stalemate at 2-13 apiece with a quarter of an hour to play, but Rathdowney-Errill’s mettle came to the fore as they finished strongly to outscore the home side by six points to two and get their campaign off to a winning start.

Abbeyleix opened the scoring in the first minute with midfielder Jake Cranny raising the first white flag of the day, but Rathdowney-Errill were back level from the resulting puck-out as they broke forward and a combination of Ross King and Paddy Purcell saw the latter force a brilliant save from the Laois keeper, Enda Rowland, who deflected it over the bar.

Rathdowney-Errill followed up with a brace of frees from Mark Kavanagh to take the lead, but a Rory McEvoy point had Abbeyleix level less than a minute later. Fortune fell in Rathdowney’s favour with four minutes on the clock when Kavanagh’s free came back off the upright and broke beautifully for Ross King to crash the rebound into the back of the net.

Abbeyleix responded well with the next five points on the trot through Eoghan Fennelly (3), Steven Reilly and a cracking long-range point from Liam Delaney. Rathdowney temporarily broke Abbeyleix’s stride with Kavanagh and Paddy McCane on target, but the home side rattled off another five points unanswered through Rowland (3) and Fennelly (2).

Rathdowney-Errill closed out the half with a Kavanagh brace and a single from Jack Kelly to narrow the deficit to the minimum going in at the break on a scoreline of 0-12 to 1-8.

Rathdowney picked up where they left off withy Brandon McGinley landing the first point of the second half and draw the proceedings, but Abbeyleix replied with the first of Stephen Thompson’s brace of goals and a single from substitute Dayne Peacock.

Rathdowney claimed the next four points, three coming from the hurl of Kavanagh. Stephen Thompson nabbed his second goal of the day shortly after, but Rathdowney replied from the resulting puck-out with a goal of their own from Kavanagh to level the sides at 2-13 each.

Rathdowney-Errill finished the stronger of the two sides with James Ryan and Paddy Purcell both on target alongside the unerring Kavanagh who added another four points to bring his tally to 1-12 for the day. Abbeyleix managed a further two points through Thompson and Rowland to close the final margin four points as Alan Doheny sounded the full-time whistle.