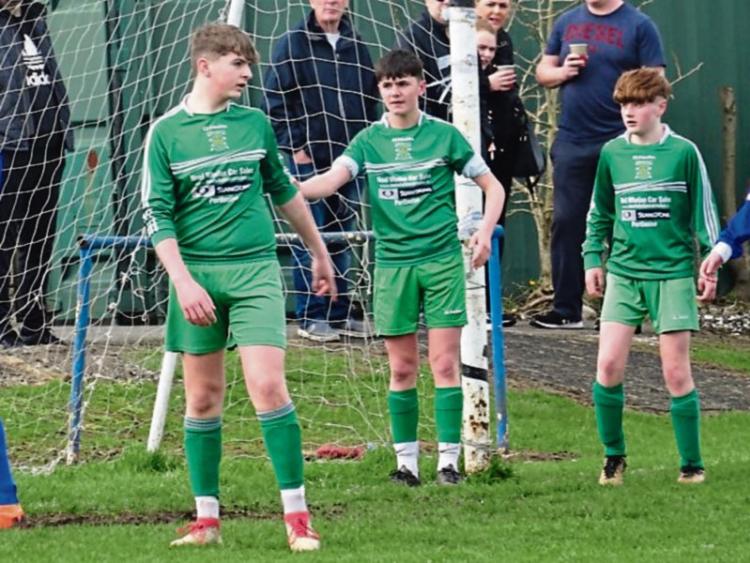 Sean O'Sullivan who had a fine game for Portlaoise

Portlaoise Utd travelled to Athlone on Saturday afternoon last to face league leaders A.C. Celtic and what a cracker of a game it turned out to be.

Five minutes in and the Athlone side took the lead , a headed effort from a free kick that looped in.

Far from dropping their heads Portlaoise responded well, with Benedict Fordjour making a fine run after being set up by Fionn Devoy, while Finn Delaney and Brandon Mcarthy were doing well in midfield.

David Burke and Matthew Walsh linked up to set Andrew Goggin up for a long range effort, and minutes later David shot just wide after fine play from Tadhg Duffin and Benedict.

Brandon went close with a free kick after being brought down himself, one of the many powerful runs he made on the day. Nice play between Finn and Fionn saw Portlaoise force a corner, resulting in Tadhg going heading just over.

They got their reward on twenty five minutes, when Matthew Walsh delivered a fine free kick into the box, and Finn Delaney latched onto it to score his second goal in two games . Portlaoise tried hard to get the equaliser before the break but AC held strong to keep their advantage.

AC started the second half on the attack again, with Andrew Goggin and David Burke getting in good incerpetions for Portlaoise, while Tadhg put in some tremendous tackles. Portlaoise gradually took control again, with some delightfull football, particularly from Finn, Luke, Fionn and Benedict, while Brandon made some powerful runs from midfield.

AC were always dangerous on the break however, and Andrew Goggin was having a great game in defence, dealing well with the dangerous AC number seven, while Sean O Sullivan, playing in defence rather than his normal front position, was outstanding, reading the game and playing good ball out to his team mates.

Portlaoise pressed hard for the equaliser, Cian Bartley Bray and Callum Leonard pushing forward trying to set up chances, while John Ging was doing some neat work, coming out from his front position and passing well to his midfielders.

Matthew Walsh was alert to an AC breakaway ten minutes from the end, reading the danger and moving across to get a fine tackle in.

Matteusz Kocon pushed forward on the left as Portlaoise fought for the second goal they deserved, but the last action of the day saw Hubert Siller pull off a double save as the home side looked set to wrap up the points.

Overall it was a pleasure of a game to watch, Portlaoise played some excellent football from defence right up to the front men, working together as a team throughout and coming off the field drained, great effort by all sixteen players used.