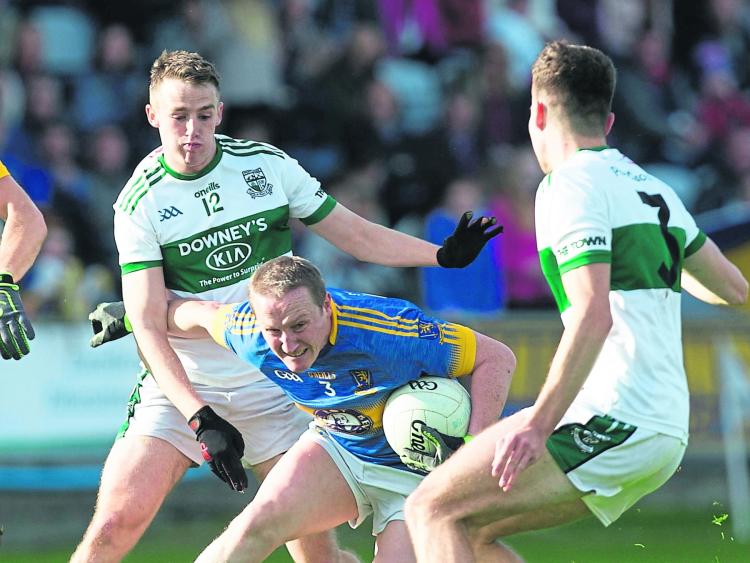 In a rematch between last year’s championship finalists Portlaoise and O’Dempsey’s, it was the Town side that came out on top once more thanks to a trio of Bruno McCormack points near the end.

Matthew Finlay slotted over the first score from a 45’, before Jason Maher replied down the other end with a fisted effort. Brian Nugent then edged O’Dempsey’s back in front from the kick-out, and came close to scoring a goal soon after, forcing Richie Downey to make a good save.

Dean Cullen levelled for Portlaoise after he intercepted around the middle, and Bruno McCormack put them in front for the first time after patient build-up play. Michael and Matthew Finlay (free) responded for O’Dempsey’s, but Jonathan Rafter pointed for Portlaoise, before Jason Maher found the net for them after he was left isolated in the square.

Bruno McCormack swapped points with both Finlay’s, and then Portlaoise raised their second green flag. A misplaced kick-out was punished, as Jason Maher handpassed to McCormack, who picked out David Holland up from corner back, and he fired past Eugene Nolan.

Brian Nugent and Ricky Maher exchanged scores, before O’Dempsey’s got a goal back thanks to their big target man Daniel McCormack, who rampaged clear and finished low past Richie Downey. They could’ve easily had a second, but Brian Nugent dragged his shot to the right and wide.

Matthew Finlay placed over the last point of the half, as Portlaoise led 2-7 to 1-8 in an end to end affair.

Matthew Finlay could’ve nearly started where he left off at the beginning of the second half, as his goal-bound effort was expertly saved by Richie Downey. Barry Kelly did swing over a point shortly after, but again the goal was there for the taking.

Barry Kelly then grabbed another score and levelled matters in Rathleague, and O’Dempsey’s took the upper hand when Michael Finlay found the bottom left corner to put them a goal to the good.

However, Portlaoise responded characteristically, kicking the next three scores to put the game back in the balance. McCormack, half-time substitute John Kavanagh and Ricky Maher all raised white flags for the home team.

Daniel McCormack looked to cause even more chaos on the edge of the square, as he got on the end of a high ball to fist over by inches, much to Portlaoise’s relief.

John Kavanagh was looking to earn a starting place for the next day out, as he swung over another fine score to leave nothing in it once more. Wing-back Tom Kelly nudged O’Dempsey’s back into the lead, but Portlaoise, crucially, finished strongly, with McCormack making sure their 100% record this season stayed intact.