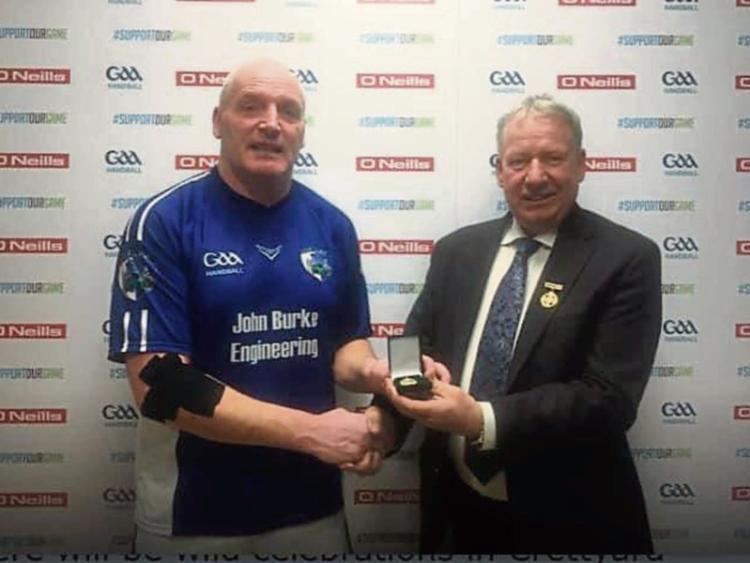 Both men went into the final after impressive victories in their All-Ireland semi-final encounters, with Joe defeating Tim O’Shea of Limerick and Sean overcoming Brendan McNeela of Galway.

In his semi-final against Tim O’Shea, Joe made a blistering start to the opening game that left his opponent on the back foot from the very off.

Adopting similar tactics for the final, Joe went on the attack from the opening rally.

This high intensity approach paid huge dividends for Joe as he reeled off a number of quick fire aces to take a commanding lead early in the first game.

McNally, sensing that the writing was on the wall, opted against trying to mount a comeback in the hope of conserving his energies for the second game.

The Laois handballer continued to take the opportunities that were being presented to him and closed out the opening game on a dominant score line of 21-4.

The second game proved to be a nip and tuck affair throughout.

The large attendance in Kingscourt expected the Down handballer to provide a sterner challenge in the second game and he did not disappoint. McNally continually looked to change up his game, mixing power shots with deftly placed positional shots in his attempt to move Joe from the centre of the court.

The Down man also found more joy with his lop-serves into both the left and right hand corner.

This change of tactics posed a number of questions of Joe, but the Monavea man was to respond impressively showing remarkable calmness in the red-heat of battle.

With the scores tied at 15 aces apiece both men traded aces until the Down handball eked out a one ace lead at 18-19.

However, when it mattered most, Joe dug deep to find another gear.

Anticipating McNally’s attempt at a passing shot down the right hand side of the alley, Joe moved in to shoot for a kill shot which he executed beautifully to tie the game at 19 apiece.

Joe followed this with an expertly placed Z-serve that McNally failed to return, leaving him now one ace away from a highly coveted All-Ireland title.

Without hesitation and sensing victory was within his grasp, Joe played the same Z-serve which once again McNally failed to adequately deal with.

After an epic second game that was in the melting pot right until its conclusion, Joe Brennan had finally fulfilled his ambitions of claiming an All-Ireland 40x20 handball title.

The large Laois support in attendance were off their feet to applaud a fantastic game of handball and to acknowledge Joe’s achievement in claiming the Men’s Emerald Master B All-Ireland title.

This is a hugely deserved title for the Monavea handballer who showed great dedication in his preparations for this year’s championships.