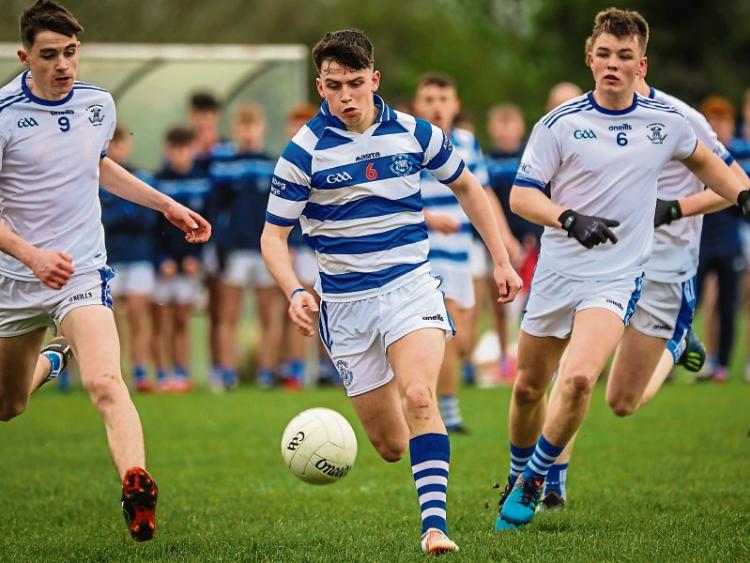 An ability to find the net at crucial times proved crucial as St Colman’s battled to a one-point victory over a desperately unlucky 14-man Knockbeg College in the All-Ireland Junior Football A final in Kinnegad on Saturday.

The Leinster champions played with the help of the breeze in the first half with points from Oisin Hooney, Colin Dunne, Oisin Byrne and Fionn Bergin putting them into a 0-5 to 0-1 lead by the 12th minute. Adam Crimmins picked off Colman’s only score up to that stage when he converted a free.

Some of the football was entertaining but a trend was developing which, by the end of the game, would see both sides share a total of 47 frees and that doesn’t include two penalties and a 45. Far too often frees were brought forward for dissent by referee Liam Devenney who didn’t take any prisoners.

By half-time he had booked three Knockbeg players and one from their rivals. Oisin Hooney paid the ultimate price for a high tackle which was rightly deemed to be yellow by the referee.

Having harshly booked the right-half forward only minutes earlier, Knockbeg were down to 14 players for the entire second half.

The game had already changed complexion when a good move put in Oran McCafferty who tipped the ball into an open net after the Knockbeg defence were prised open.

Again the Leinster side pulled four points clear but when Tony Magee was fouled in the big square up stepped Crimmins to convert the penalty.

By half-time Knockbeg led 0-9 to 2-1 but even though there was a cross-field breeze the elements favoured the side playing from right to left.

The Newry school were in a good position going into the second half and with that breeze helping them, they went for the jugular.

By the 35th minute the sides were level after Crimmins converted a free and Dan McCarthy also pointed.

Midfielders Padraig Clancy and Ronan Fitzpatrick added points and the former ran from the 45 to bury the ball in the net with just over a quarter of the match remaining.

If the two first-half goals were momentum changers then this concession was huge.

A missed Knockbeg penalty awarded when Fionn Bergin’s shot was foot-blocked gave them a mountain to climb.

The absence of Hooney who had knocked over two points and would surely have added more in the second half left a gaping hole in the Knockbeg attack. The Northerners used their extra man as a floater between the two 45-metre lines. It worked a treat and Knockbeg also found the Newry full-back line in stubborn form.

The Leinster champions persisted despite the set-backs which seemed to come at them time and time again.

With the minutes ebbing away they trailed by three and two Fionn Bergin frees reduced the margin to the minimum.

Whatever about Bergin’s first free in injury time it seemed he had to play his second one in around the small square. Somewhere communication broke down, which wasn’t very strong anyway, between the referee and the attacking team who would surely have asked what time was left.

As Bergin planted the ball over the bar the question has to be asked whether the players felt there was time for one last attack from the kick-out. There wasn’t. When the ball left the keepers’ foot the blast of the full-time whistle ended proceedings.

The Newry boys were glad to hear the full-time whistle while Knockbeg were left to rue those body-blows which came at them from the time the eventual champions scored their first goal on 12 minutes.