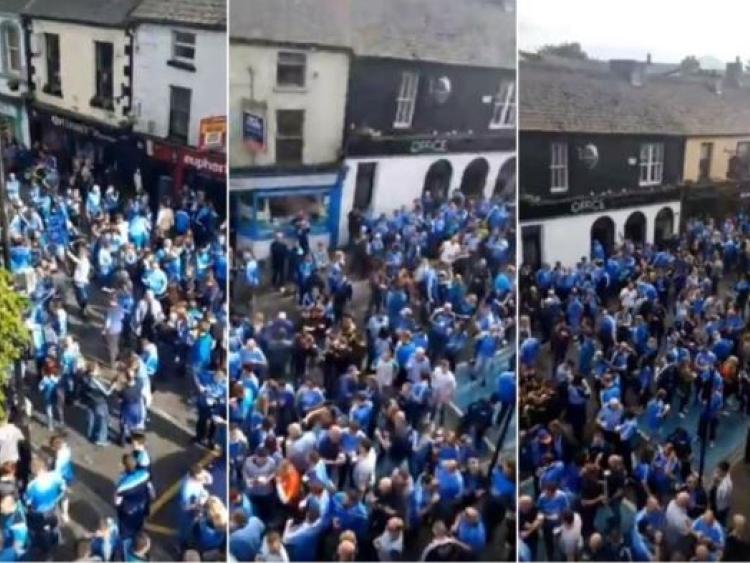 The Dubs will descend on Portlaoise this weekend in a sea of blue to kick off their historic fight for five-in-a-row in the All Ireland Senior Football Championship.

Jim Gavin’s defending champs are sure to bring a crowd of dedicated fans to support the boys in blue in O’Moore Park on Saturday evening when they face Louth in the Leinster SFC quarter-final.

The Dubs have arrived in Portlaoise in flying form in the last number of years for clashes in O’Moore Park leaving locals and Dubs alike with memorable scenes of Main Street.

In May last year, Hill 16 on tour arrived in Portlaoise for a clash with Wicklow. Gardaí were prepared to close off Main Street for a time following the year before when Portlaoise rolled out the blue carpet for the Dub’s three-in-a-row campaign against Carlow.

Dublin star Diarmuid Connolly was handed a 12-week ban after he pushed linesman Ciarán Branagan during that win over Carlow in Portlaoise in 2017.

Connolly has had a stint across the water in Boston since and Jim Gavin said the door is open for the possibility of his return.

More memorable moments are set to come out of this weekend in O’Moore Park, as the Dubs continue to blaze a seemingly unstoppable trail ahead to a historic five-in-a-row.

Irish Rail advertised cheap train fairs early in the week for fans travelling to Portlaoise and locals can prepare for the boys in blue to flood the Abbeyleix Road en route to the match which kicks off at 7 pm.

Portlaoise has given a warm reception to the dubs in the past, with a barbeque and stage on Main Street where the legend of Luke Kelly performed some classics keeping spirits high.

Ballyroan Abbey GAA Club in Laois has put the call out for stewards to help in O’Moore Park for the doubleheader on Saturday, saying that a crowd of up to 20,000 is expected.

Laois senior footballers are also out this weekend against Westmeath in O'Connor Park Tullamore at 2 pm on Sunday.