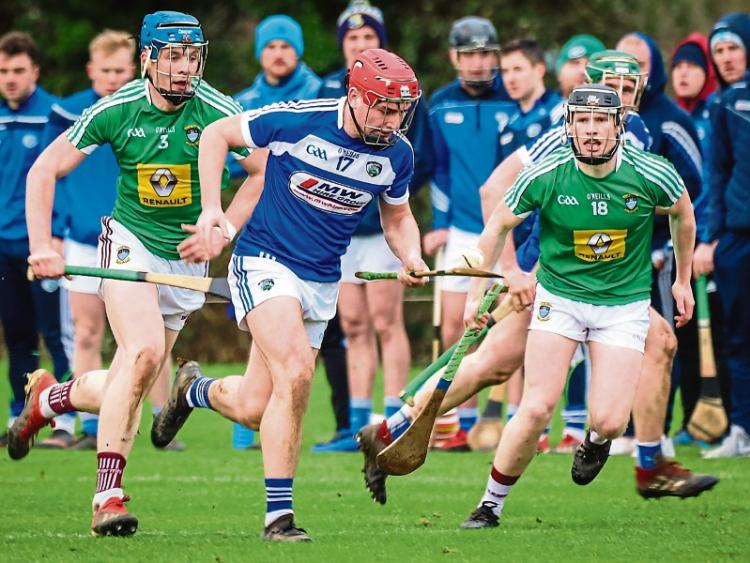 Borris-in-Ossory was the venue on Sunday for the meeting of these modern day midland rivals and after Laois started poorly they grew into the game but faded out in the closing ten minutes.

Conditions in the new ground were perfect and the club can be proud of the new sod.

It was perhaps fitting that the first Laois score in the new pitch would come from local boy Aaron Dunphy now studying to be a teacher.

Aaron picked up the ball on the right wing and fired between the uprights at the pavilion end and it lifted Laois.

Next up was another Laois attack and Eoin Gaughan doubled the home account.

The Camross man made it three after Laois forced a sixty five after twenty four minutes.

Westmeath responded with a Darragh Clinton point but after Willie Dunphy saw a line ball skim the post it was one of last years’ contingent Ryan Mullaney who converted a free from almost seventy metres and suddenly Laois were finding their men all over the field.

Eoin Gaughan converted a free and a superb strike by Willie Dunphy reduced the deficit to one with five minutes remaining.

The closing minutes saw Westmeath recover introducing Joe Boyle in attack and Darragh Clinton fired over a point from play then after Paul Simms denied the visitors twice he was finally beaten when the sub Boyle fired low into the bottom left hand corner.

Laois won a line ball which Willie Dunphy squeezed magnificently between the uprights leaving the visitors in front 1-8 to 0-7 at the half way mark.

Laois management would have been pleased with their first half performance and with wind assistance to follow there was an air of confidence around the ground.

Eoin Gaughan converted a free in the forty third minute but Laois were not hurling with the same fluency and both teams were guilty of missed oppurtunities.

Derek McNicholas kept his side in front mainly from placed balls and despite making little inroads into the Westmeath half Laois were still much in contention and with after Aaron Dunphy added their second point of the half Laois were awarded a close in free for a chop down Eoin Gaughan stood over the ball let fly and became the first Laois man to score a goal at the new venue.

The gloss was taken off the goal when the visitors went down field and an opportunist Darragh Clinton flicked the ball past the Laois defence and after the same player pointed Eoin Gaughan and Aaron Gaughan added a point apiece leaving the board reading 2-12 to 1-11 and ten minutes remaining.

The big Laois attendance anticipated a shock but that was as good as it got.

In fairness management were already giving newcomers a run out and the only other home score was pointed free by Eoin Gaughan. Points by McNicholas ensured the visitors under new management went home with the points that will be enough to see them reach the semi-final.

For Laois a good work out with a very understrength squad who now face another team seeking revenge and that is Dublin on this Thursday evening at Parnell Park.

For one debutant it was a special occasion James Keyes who was outstanding in the under twenty hurling championship last year with “Raheen Parish Gaels” he became the first Colt hurler in years to wear the Laois senior jersey number fifteen.