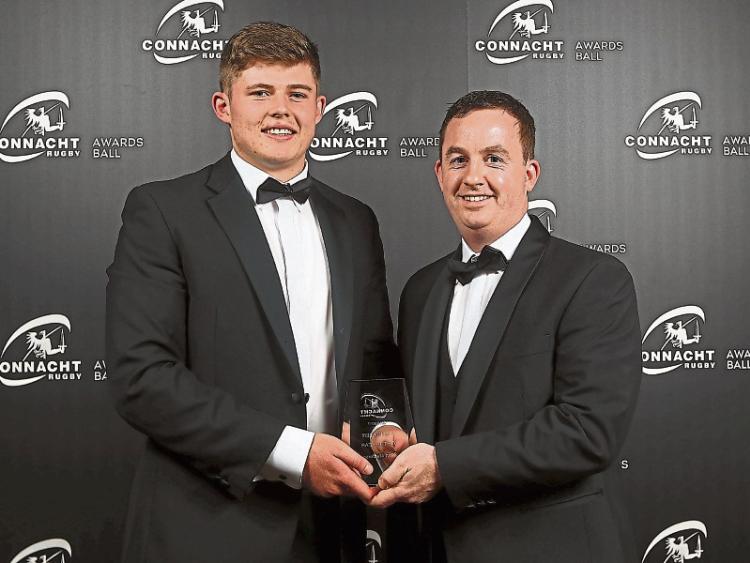 Sean Masterson, Connacht's U/19 player of the year presented by his award by Paddy McDonald at the 2017 Connacht Rugby Awards

At 22 years of age, Seán Masterson, a product of the Portlaoise Rugby Club’s youth system, signed his first professional contract with Connacht last week as the young backrow continues to thrive out West.

Born, reared and schooled in Portlaoise, Seán is an O’Moore man at heart. He learned his skills on many a cold, dark night at Portlaoise RFC’s grounds in Togher, and indeed the Park-Ratheniska GAA pitch, while all the time honing his trade in the family garden in Colliers Lane with his brother for company.

He’s now joined an exclusive list of Laois players to make the leap to professional status, alongside his older brother Eoghan, as he aims to establish himself in Andy Friend’s side when rugby returns after the global pandemic.

The Masterson family’s shift West has ramped up in recent years as their parents made the move to Westport two years ago after almost 30 years in Laois.

Their mother Anne, a retired Garda, is originally from Westport while their father Pat is Scottish but moved to Westport when he was 18 before taking up a role as a prison officer in Portlaoise.

“I suppose that was always their plan since we were young, rugby or not, to move over here so they built a house here a few years ago and I’ve been here quarantining with them for the last 10 weeks or so,” explained Seán.

“It’s nice to have our parents a bit closer to us now and I have cousins here and everything so it's grand.

“Portlaoise is our hometown and has been really good to us. My parents were there for probably 30 years and obviously it’s where we grew up and we'd all have close friends there, but most of our family would be around here.

“It’s been nice to be home the last few weeks, taking it easy and relaxing with the family. It’s not something I’d usually get a whole lot of time to do so it’s been a strange time but I’ve been enjoying the downtime.”

His older brother Eoghan, 27, made his debut out West in the 2014/2015 season and, despite some terrible luck with injuries, is fast approaching on a century of caps for the province and has foraged a pathway for his younger brother to follow. The Masterson brothers may play the same position, but Seán is most certainly his own player.

Capped with Ireland at U-18, U-19 and U-20 level, Masterson rose through the ranks at the Connacht Academy to make his senior debut last season against Treviso in a Guinness Pro14 clash at the Showgrounds. Eoghan went down with cramp with 15 minutes to go and with the family looking on from the Clan Terrace, Seán was sprung from the bench to replace his older sibling as Connacht went on to record a 41-5 victory over the Italian side.

“I never really dwell on stuff like that but when you look back, you're like, 'Jesus, that is a bit cool',” said Seán of his debut back in October 2019.

“It was unreal at the time and obviously before the game you're not thinking much else, just try not to make a mistake or whatever. You're nervous to not mess it up really and you're just focusing on doing your job when you get out on the pitch.

“When you look back on it though, it is a bit class because not many people can do that and say that they did it with their brother.”

With his parents, cousins and a stadium of spectators watching on, the pair didn’t exactly have time for a fairytale exchange in the heat of the game - but Seán says the Eoghan did manage a few words of encouragement.

“I think he said, ‘do what you do, you'll be fine’. I can't even remember the specifics to be honest, it all came about pretty fast, but it was a nice moment for us.”

Prior to rugby taking centre-stage for Seán, he was an accomplished Gaelic footballer with his club Park-Ratheniska. Eoghan had spent a bit of time with Portlaoise GAA but when their next-door neighbours, the Delaney’s, made the move to the rural club the Mastersons followed suit.

“The Delaney’s were living next door to us and they made the move out to Park-Ratheniska so Eoghan went along too. Naturally, I went out too from about the age of five or six and started playing with the Minis and right through to Minor.

“At Minor level I was playing more rugby than GAA at that stage. Still though, all of us were best friends on the Park-Ratheniska team. I mean, we were all fairly close because we'd grown up together. So I was asked to play that Minor final, but I was like, 'No, I won't play it' because it wouldn't be fair.

“I hadn't really been there the whole year, but the lads said they didn't care about that and to come on and play. I knew it could be the last game I'd play, so I said fair enough. I wish I had bowed out with a win but sure that's life,” he laughs.

While GAA and Park-Ratheniska were always good to Seán, he always knew deep down that the oval ball was his true calling.

“I started playing rugby with Portlaoise at four or five too. Our father is Scottish and he played rugby when he was younger so that's where the interest in rugby probably came from.

“As we got older I was lucky enough to play in a really strong Portlaoise team and the Club were really good to us the whole way up. And then I just kind of kept going up the ladder and Eoghan was ahead of me as well, so I guess I could see the pathway which made it a lot easier for me.

“I could see the trail in a way, like I wasn't thrown into the dark. I could see that this actually could be realistic so I put my head down and always believed that if Eoghan could do it, then I could too.”

Despite lining out in the blue of Leinster for a period, Masterson jumped at the chance to follow in his brother’s footsteps and head West.

“I played with Leinster at U-18s, and then I got a call from Nigel Carolan who is the backs coach at Connacht now, and he offered me a place in the Academy.

“I could see the pathway in the Academy over there and my parents have ties to the West so when the opportunity came about I 100% took it with both hands and moved over after my Leaving Cert in 2016.”

His time in Connacht has seen him rise through the ranks and he made two senior appearances for the province last season - his debut against Treviso and a second outing against Leinster - while he also scooped the U-19 Player of the Year Award in 2017, and now after his final year in the academy, he was delighted to sign his first contract for the province last week.

“The plan now is to keep the head down and get back to training after Covid, and put down my own marker for a position in the backrow and get some more regular game time.

“Hopefully we can progress and grow personally and as a team. If you play well as a team you individually move on as well because everyone's pushing each other.

“Obviously I'd love to push on and nail down my spot here in Connacht, and the overall goal is to get on to the Irish squad in the next few years. It'd be huge if Eoghan and I could make that next step and someday pull on the green jersey together. A lot of things have to work out in your favour for that to happen, luck and injuries is a big part of that , but hopefully someday we'll get that opportunity.”