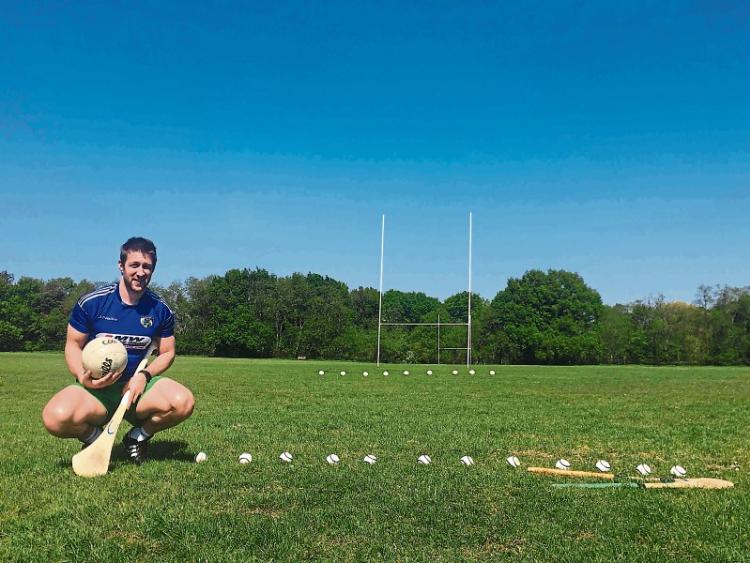 Ten weeks post-surgery from his third operation in the space of a year, Cahir Healy’s troublesome knee held up to the vigours of a novel 1000 hurling points, 1000 football points and a 42km marathon fundraising challenge in a London park last week.

Healy, 33, is as decorated a dual player as you’re likely to find in the modern game. He’s split his time between the Laois hurlers and footballers over the last number of years, all the while commuting back and forth from his home in London where he’s based as a teacher.

The fundraiser, 2000 points for 2000 donations, was Healy’s part in contributing to the fundraising efforts for the Do it for Dan campaign - the fundraiser which swept the nation in aid of little Dan Donoher from Ballybrittas, Co. Laois, and the son of Healy's long-serving teammate Niall.

“Myself and Niall came up on Laois teams the whole way through. I’m pretty sure I’ve never played on a Laois football panel that he wasn’t on as well. I’d almost be 100% sure on that stat,” started Healy.

“We even got called up to our first Laois U-14 panel at the same time. Neither of us made it from the trials at the start of the year, but once the club championships were over we both got called up.

“I’m not going to lie here and say I’d be in contact with Niall every week, but from that age group - although we’ve all gone our separate ways, we’re pushing towards our mid-30s, some lads are married with kids - I think there’s quite a strong respect between the group.

“Even if we haven’t seen each other in a long time, sure I probably hadn’t seen Niall in a few years because I’d been off with the hurlers, even then I would have felt a little bit of duty. We’ve all been through so much and played so much together over the years that the right thing to do during all of this was to help him and his family. And I think a lot of people from that age group would have felt the same as well,” explained Healy.

Before embarking on his challenge, Healy had been sidelined since February having tweaked his knee on his first start with the Laois footballers since 2013 against Clare in this year’s NFL. The result was a third operation in almost a year but as Healy explained, at least it wasn’t the dreaded ACL again.

“I did the knee again on February 23 and I had the operation on March 13. That was the main reason I left the fundraiser so late. I put it out there about a month ago that I was going to do it, and I didn't do it that weekend or the weekend after was to give my knee couple of extra weeks, just to be safe.

“The knee operation I had wasn’t a massive surgery or anything, it was just a cartilage surgery this time thankfully. So if you didn’t have any other problems with your knee, generally you're talking about an eight week recovery to back on the field. Now, my knee is far from a normal knee anymore though.

“So I’m 10 weeks post-surgery now and to be jogging around and kicking a few balls would be fine for my stage. What I was doing on Sunday would really put my knee at risk, but if I went out and tried to play a game tomorrow I’d break down. There’s no way that my knee would hold up to the rigours of a game or a proper training session at the minute.

As the Do it for Dan campaign reached their target before Healy embarked on his challenge, the decision was made to the cap the first £7,500 towards Do it for Dan, with all monies raised after that being equally split between Midlands Regional Hospital, Portlaoise and the NHS. His GoFundMe page is still active and has risen to a staggering £17,500.

“The way I was looking at it was if the average person donated a tenner, that’d make £20,000 - but to get it up to where it is mind-boggling.

“I’ve been lucky in the sense that the guys over here in the UK have been great to me. And also I played two summers over in Boston with Donegal Boston for the football and Fr Tom’s for hurling, and they weighed in too. These are lads I wouldn’t have seen in years, so it’s really humbling.

“To get it up past £16,000 is beyond my wildest expectations to be totally honest. I’m kind of blown away by it,” said Healy.

With no live sport to entertain the masses, people from all over tuned in to hourly updates from Healy and his helpers. They utilised Facebook Live streams for people to track his progress, resulting in plenty of craic in the comments section.

“The lads do always be telling me I can’t kick it with the left but I always tell them I have an impeccable record of shooting in games - purely because it rarely, rarely happens. And when it does, I’m usually standing on the 14 with nobody around me,” joked Healy.

“The boys were slagging me and there was abuse coming out of every direction - ‘What would you know about kicking points?’ and ‘It’ll take you until Tuesday to finish it’. So, John Paul Seale asked me how many shots did I think I’d take with the left. In training at the time it was probably around 30% of them, so he said he’d give me 50 cent per point off of my left.

“It worked out at almost 50/50 in terms of points off of my left and right, so I was joking in the live videos that he’d have to go out and remortgage the house,” laughed Healy.

“There was a bit of fun and a bit of craic knocked out of it along the way. It was a nice distraction and I was lucky I had the helpers there to read the comments as I was doing it, because if you were out there on your own for nine hours you’d lose the plot altogether.”

Healy completed his challenge in almost exactly nine and half hours, as his small bit of preparation had indicated.

“There wasn’t a massive about of specific preparation put into it because I was mainly focusing on my rehab. That was the most important thing to me so I was more or less just following the rehab programme.

“I went out for maybe three Saturday’s and just did a trial run. I started with a two-hour trial run, then a three-hour one and finally a four-hour one just to figure out how long it would take me, what order I should do it in and a few bits like that.

“Last week, I went out for four hours and then tried to run a 10k at the end - and that almost killed me. So I learned that instead of doing all the shooting and then trying to finish off all the running wasn’t going to work, so I decided to break it up.

“I settled on an hour worth of shooting and then I’d go off and run for a while, and repeat. That’s how I ended up finishing with a point of each. It was nicer to finish with the scoring than the running.”

Moving forward, while Healy’s knee may no longer be a ‘normal knee’, he says he’s well on the road to recovery.

“The only time the knee came at me was during one of the live videos and the lads helping me out were calling out a few of the comments. Kieran Lillis questioned the lack of any outside of the boot shots, so I swung the outside of the boot at one and I thought the bottom of my leg was going to fly off. But other than that the knee held up fine and isn’t showing any ill-effects.

“I’m moving on to a new 5-week programme now which will be a new test for the knee. Staring to change direction and cutting and turning. So if all goes well over the next five to 10 weeks I’m hoping to be back ready to play.

“The knee is in bad shape, but I’m positive. There’s been three surgeries on it in a year or 15 months so it’s not in the best of shape. I’m building up frequent surgery miles up there in the Sports Surgery Clinic in Santry! I’m hoping I can get it right and get back on the field, that’s the aim anyway and we’ll see how it goes.

Finishing up, Healy was taken aback by the public support for charitable organisations and funds during the Covid-19 lockdown.

“For me, that was the big message I took from all of this. What got Dan the €2 million and over the line was that so many people did so little, together. A lot of people doing a little is better than maybe five people doing a lot. It just goes to show that if you get the whole community pulling one way, all doing a little bit of pulling, it’ll really get you going far.”