Ballyroan off the mark in Intermediate championship 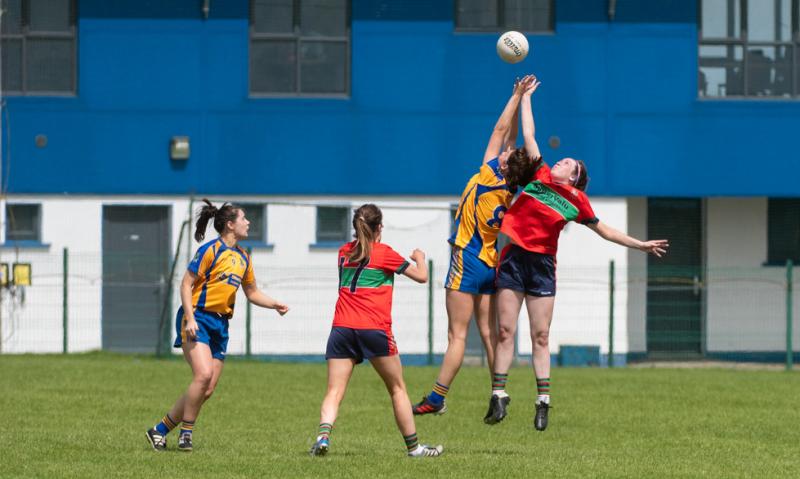 Championship action came back into focus at the weekend as Ladies football got the ball rolling in the re-started GAA calendar.

It has been over three months since any action had took place in the County and with the sun making an appearance over the weekend, the supporters attending the games had double reason to be in high spirits.

In the Senior championship it was Sarsfields who set out their stall early with a comprehensive 8-17 to 0-9 win over Timahoe in a repeat of last year's final.

Timahoe actually started the game well but once Sarsfields got in their stride, they had too much power and pace all over the field.
Joyce Dunne top scored with 4-1 as they sent out a strong message to anyone that might have been thinking their hunger might be slipping. Click here for match report.

Portlaoise also got off to a good start with a 4-11 to 1-8 win over St Conleth's. Leah Loughman was the star of the show for Portlaoise with two goals but the game was extremely close in the opening half as a later Laura Dunne goal towards the end of the first half left it tight at the break.

Portlaoise put in strong start to the second half that included a goal from Aisling Kehoe and they began to stretch their legs and pull away from St Conleth's.
The points kept rolling while a Shauna Jackson goal put the icing on the cake as they got a big win ahead of their second round clash with Sarsfields.

The third game in the Senior championship saw St Brigid's come out on top over St Paul's.
St Paul's were playing their first Senior game having won back to back promotions from the Junior and Intermediate ranks and they certainly put in a strong showing.

St Brigid's led by six points at half time with a goal from Anna Moore proving vital.
A quick-fire 1-2 from St Brigid's including a goal from substitute Niamh Power made the game safe for St Brigid's who had Patrice Whelan in fine form from play and from frees.

This year's Laois Ladies Intermediate Round one clash was a repeat of last year's championship Semi final with Ballyroan coming out on top by three points in the end.

The game started at a very high pace with Kate Whelan settling the Ballyroan side early with 2 frees. A couple of points from the O’ Connell sisters set Park-Ratheniska up well when the first goal of the game came from a powerful run down the middle from Ailbhe Griffin.

It didn’t take long for Ballyroan to respond with two goals themselves, a super goal from Eimear McWey and Ballyroan took the lead on a score line of 2-4 to 1-5

Park-Ratheniska pushed on with a cracking long range score coming off the left boot of Laois Ladies captain Anna Healy followed by a couple more from Catriona Fogarty.

It was the strong goal scoring Ballyroan side leading at half time with a score of 4-8 to 1-11.

Park Ratheniska started the second half well and had a lot of procession but scores were hard come by as Ballyroan defended in numbers with a strong display coming from Clodagh Dunne and Emily Mulhall.

Another great run down the middle from Ailbhe Griffin saw the ball skim over the crossbar which would have put one between the sides. The game finished with a fine scoreline of 5-12 to 2-16.

Ballyroan look to extend their winning streak in the second round on Wednesday the 29th of July against Clonaslee/St.Manmans while Park Ratheniska have to wait until August 8th to play St Joseph’s.