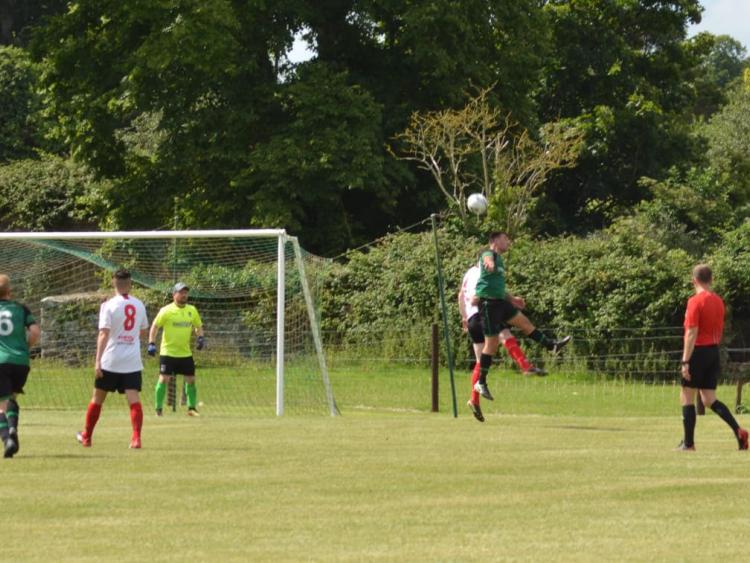 Local soccer made a welcome return at the weekend

It was a fantastic end to end game in Stradbally on Sunday morning where two teams right in contention for the Division one title faced off in a thrilling game.

Mullingar had the better of the early exchanges and went ahead on 16 minutes when a low cross was converted past Home stopper Derek Beale from low range.

Stradbally regrouped and got back on top with Alex Conway, Jody Dillon and Tim Flood going close before the break. Mullingar also had their moments to go further ahead but it remained 0-1 at the break.

Stradbally roared out of the blocks in the second half knowing defeat wasn’t an option to stay in contention for the title and dominated possession right from the start.

Conway again and Benny Lawlor this time with opportunities to draw level early on. Mullingar were reduced to 10 men with 22 mins to go with a midfielder receiving a second yellow.

This led to the ball being nearly camped in the Mullingar half for the remainder of the game but they always threatened in the break with their attackers displaying both strength and pace in abundance.

Stradbally got their deserved equaliser on 76 minutes when a loose ball broke to Substitute Tom Shiel and he fired home a low drive from all of 20 yards low to the Mullingar net.

Stradbally has a penalty shout late on for handball but referee Leslie Buckley waved play away and then Mullingar thought they grabbed the winner in injury time only for referee Buckley to rightly call it back for offside so a share of the spoils in the end in what was a terrific game with both teams leaving everything on the field.

Aaron Wright, Justin Lalor and Jody Dillon stood out for the home side with Wright especially adapting well to an unfamiliar left back role.