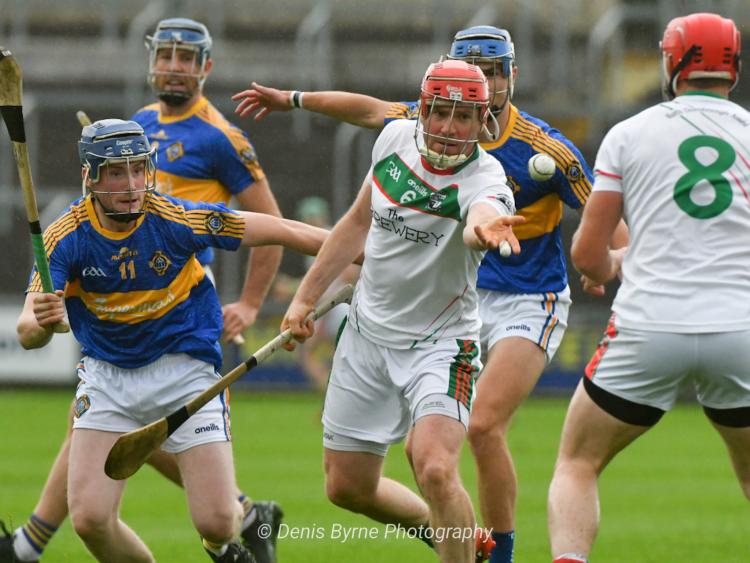 Clough Ballacolla will wonder how they didn’t leave O’Moore Park with the win earlier tonight but they had to settle for a draw as they shared the spoils with reigning champions Rathdowney-Errill in the opening round of the Laois senior hurling championship.

As it happened, it took a Stephen ‘Picky’ Maher free to earn them a draw but it was their 17 wides that they will look back on and regret.

Rathdowney-Errill didn’t score from play until Paddy McCane’s goal on 45 minutes and they will be happy enough to escape with the draw.

The first half was a rip roaring affair and it was Aidan Corby who got the opening score inside the opening minutes.

The Clough-Ballacolla men were fired up but Ross King, who would hit 10 points in the opening half, settled Rathdowney-Errill into the game with three frees in quick succession.

Clough Ballacolla then got a massive break. Mark Hennessy was brought down in the box for a penalty with Stephen ‘Picky’ Maher making no mistake in finding the net.

From the puck out, Clough Ballacolla won it back and as Willie Dunphy bore down on goals, he still had plenty of work to do. After making some room for himself, he let fly with a low shot and found the net to make it 2-2 to 0-3 after just seven minutes.

Picky Maher was in great form early on and two more points from him consolidated their lead.

As the wides began to rack up for the Clough Ballacolla men, Ross King was slowly but surely keeping Rathdowney-Errill ticking over from placed balls as he landed another three in a row.

Picky Maher and Aidan Corby kept Clough Ballacolla in the ascendency but it took a great save from their keeper to deny Paddy Purcell a goal on 25 minutes.

Clough Ballacolla didn’t score for the final seven minutes of the half while King landed two more placed balls to narrow the gap at half time as Clough Ballacolla led 2-6 to 0-10 at the break.

Ross King opened the second half scoring but three points in a row, two of which from Picky Maher had Clough Ballacolla 2-9 to 0-11 in front on 38 minutes.

King was still the sole scorer for Rathdowney-Errill but points from Willie Dunphy and Willie Hyland suddenly put them five points to the good.

Then, right before the water break, Paddy McCane ran in along the endline and found the net to give his side a badly needed tonic and to cut the lead to 2-11 to 1-12.

King then landed three more in a row, including his and Rathdowney Errill’s first from play to edge them in front but there was plenty of drama left.

Picky Maher drew the sides’ level before they went on to puck six wides in a row, the majority guilt edged. James Ryan put Rathdowney Errill in front but with the last puck of the game, Picky Maher levelled with a free.