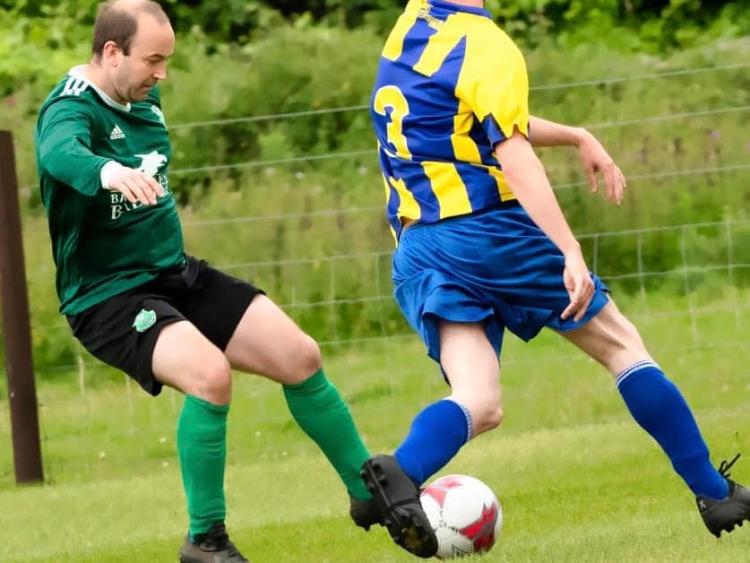 Stradbally Town are into the Shield semi final

Stradbally’s second team made it to a first ever Counties Shield semi-final on Sunday morning with another terrific home display against a Ballinahown B team flying high at the top of their Division.

From the off it was clear Stradbally were up for it and were ahead on 11 minutes when Luke Kelly and Liam Clancy combined to create the chance for Ciaran O’Neill who finished from eight yards out to put the home side ahead.

Ballinahown came straight back at the youthful home side and had veteran keeper Robbie Moore to thank on a couple of occasions who denied Ballinahown attackers with point blank saves.

The away side also looked dangerous from corners and were physically a bigger and taller side which benefited them from such scenarios.

It was though good football on the ground that they equalised from when a nice ball in behind the home defence was riffled home past Moore from 14 yards on 34 minutes.

To their credit the home side dusted themselves down and got their tails up again.

Luke Kelly going close on a couple of occasions and then just before half-time a Ballinahown corner was punched clear by Robbie Moore which found Ciaran O’Neill, he sprinted forward and found Colm Clancy with a perfect pass who had sprinted from his own penalty area to get on the end of the move and superbly slotted home from 12 yards from a tight angle.

A fantastic break away goal that started just seconds earlier in the Stradbally penalty area, 2-1 at the break.
The second period followed much the same pattern and with only a one goal advantage the home team were always wary of the Westmeath men.

A third goal did however look likely for the Stradbally men as the game wore on and with maybe an extra bit of fitness giving them the advantage over their opponents.

Liam Clancy was running the Ballinahown defence ragged but just lacked the end product until on 80 minutes when he received a ball from his brother John and despite being blocked the first time in the area he recomposed himself avoiding another tackle to smash home the killer third goal despite the best efforts of the Ballinahown keeper.

Substitute Jamie Devoy volleyed over a great effort just before the end which would have really polished off a fine Stradbally display but they had done enough to make it into the draw for the Semi-final.

Ballinahown can be proud of their display as well and never gave up the fight right until the end, they’re focus returns to league business now with one important game left in that.