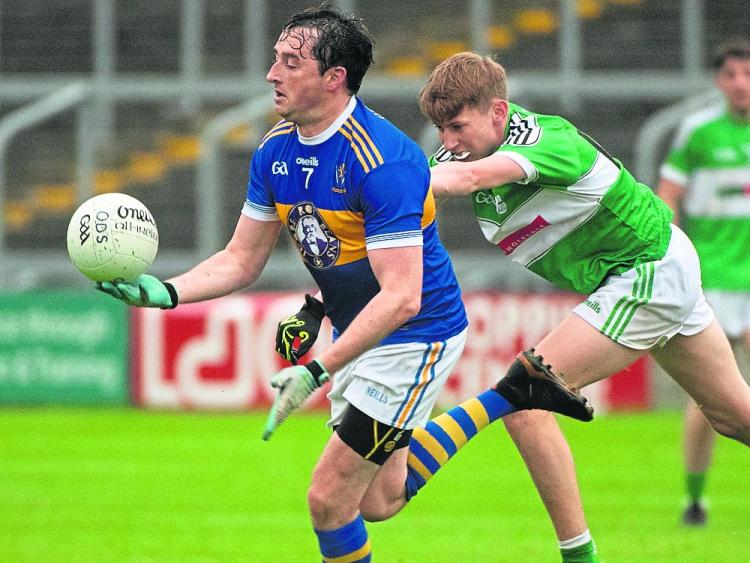 The Killenard men hit three in the first half and four in the second to leave Courtwood with little chance in this one, and they will be hoping they are back in the type of form that saw them qualify for the Laois SFC final back in 2018.

O’Demspey’s started like a team that were desperate to make up for lost time, as Matthew Finlay pointed two frees in the opening couple of minutes to put them into the early lead.

Courtwood got up and running thanks to a Danny Luttrell free, but the early stages were dominated by O’Dempsey’s. Barry Kelly almost had the opening goal of the game in the sixth minute but his effort was tipped over by Matthew Byron. It was notice being served though, and the opening goal wasn’t far away.

In their next meaningful attack Míchael Finlay cut in from the right wing for O’Dempsey’s and his left-footed shot found the back of the net, despite Byron getting a hand to it.

Courtwood responded with a free from Alan Kinsella but O’Dempsey’s were on top and kept driving forward. Another Finlay free pushed them further ahead and then a super point from the right wing by Brian Nugent saw them lead 1-6 to 0-4 at the water break.

That interval worked to Courtwood’s advantage and within a minute of the restart they had registered a goal. Paul O’Flynn provided the finish at the end of a good passing move to see the gap down to two points. That would be as good as it got for Courtwood, however.

O’Dempsey’s restored their advantage thanks to a brilliant backheeled goal from Mark Barry, and that was quickly followed up by another goal, this one for Matthew Finlay.

Courtwood rallied late in the half but it was still O’Dempsey’s who were in control, as they were 3-7 to 1-7 ahead the interval.

Conor Meredith’s point early in the second half showed that there was going to be no let up from the leaders, but few could have predicted the way the game would pan out.

Courtwood responded to Meredith’s effort with a couple of points, but it was something of a false dawn. Dan McCormack was soon slotting in O’Dempsey’s fourth goal after rounding Matthew Byron, and their fifth wasn’t far away either.

Mark Barry cut in brilliantly from the right wing, saw off a couple of challenges and then found Matthew Finlay unmarked at the far post to palm to the net.

Danny Luttrell again tried to calm down his side with a free, but Míchael Finlay added two more goal to wrap up his hat-trick and leave the final result in little doubt. Luttrell kept tacking on points for Courtwood but they were cosmetic at this stage, as O’Dempsey’s ran out worthy winners.