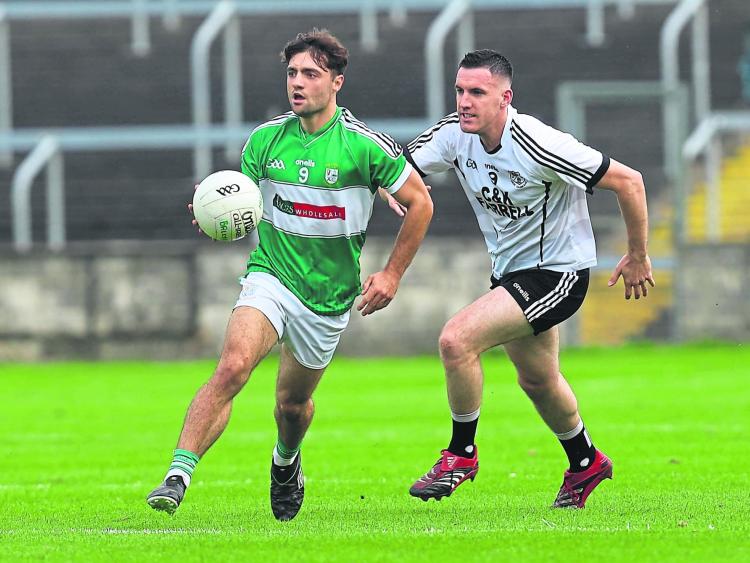 The Laois Senior football championship will do well to have another game this year that served up the entertainment Ballyfin and Rosenallis showcased this evening. Both sides exchanged the lead numerous times, but in the end Ballyfin just about held off last year's Intermediate champions Rosenallis to advance.

Ballyfin started on the front foot. James Finn won the throw-in, and immediately looked up to play it inside to the dangerous Sean Moore, who split the posts. Ronan Murray replied for Rosenallis through a free from close-range.

Sean Moore put Ballyfin ahead through another placed ball, but Rosenallis nearly struck back in devastating fashion. A well-worked move involving Eoin Dunne and Ronan Murray allowed Colm Poole to race through, but his effort blazed off the bar and over for only a point.

Colm Poole gave Rosenallis the lead, and then midfielder Eoin Dunne fired over the score of the game. Dunne faked two dummy solos which Ballyfin players fell for, before he sliced over with the outside of his left boot.

Allan Connolly, one of four Connolly's in the starting fifteen for Ballyfin, burst up from corner-back to leave just one in it with ten minutes gone in McCann Park. James Finn levelled proceedings swiftly after, as he placed over a sweetly struck 45’ before the first water break.

When play commenced, we had our first goal, and it went the way of Rosenallis. Eoin Dunne appeared to be running into traffic in the form of Ballyfin bodies, but somehow Dunne managed to find a way through and slide it soccer-style past Robert Foran.

James Finn quickly responded down the other end with a well taken point for Ballyfin, but Ronan Murray restored the three point advantage for Rosenallis through a free.

Rosenallis looked to be in dream land when they fired in a second goal, as Ronan Murray volleyed it into the goals despite tight pressure from David Connolly. However, Ballyfin caught them sleeping down the opposite end only seconds later, as Louis Duff buried it in off the crossbar.

Sean Moore finished the half by cutting the arrears to the minimum, as Ballyfin trailed 1-7 to 2-5 in a free-flowing first half in Portarlington.

After a couple of minutes into the restart, Ballyfin were awarded a penalty after Sean Moore was deemed to have been taken down in the square by Rosenallis' John Maher. Sean Moore stepped up and dispatched the penalty himself to give Ballyfin the lead.

Ronan Murray replied with Rosenallis opening score of the half, but Sean Moore was proving too tough to handle, as he placed over another two scores for Ballyfin.

There would only be one more score until the second water break, with Rosenallis substitute Brian Fitzpatrick curling over from an acute angle to leave two points between the teams.

Sean Moore and Colm Poole exchanged frees after the water break, before Murray cut the deficit to just a single point as we entered the last ten minutes.

However, Ballyfin struck a killer blow with their third goal of the game. Jack Priestley saw his first attempt blocked, but he buried it at the second time of asking.

Ronan Murray placed over two frees, and Colm Poole also hit the target for Rosenallis, but in the end they came up just short.