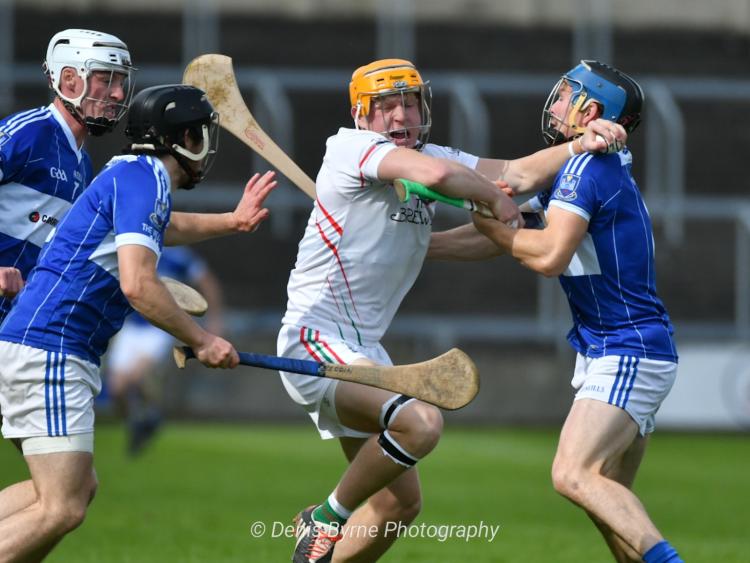 Rathdowney-Errill were in no mood for messing around earlier today as they beat Castletown by 30 points in the Laois senior hurling championship Group A, Round 2 clash in MW Hire O'Moore Park.

It was a chilling message they sent out as they rampaged their way through a totally outclassed Castletown outfit.

Mark Kavanagh hit 0-17 while the victors cut a different figure than that was seen on the opening night when they were lucky to scramble a draw with Clough-Ballacolla.

The first half was all one way traffic with Rathdowney-Errill making no mistake in stamping their authority on the game in the early stages.

After Mark Kavanagh opened the scoring with a free, James Ryan cut in along the end line and fired a low drive to the bottom corner of the net giving JP Bennett no chance in the Castletown goal.

Kavanagh, Paddy McCane and Ross King all added scores to bring their tally to 1-4 before Dylan Conroy opened Castletown’s account with a free on nine minutes.

That only briefly halted Rathdowney-Errill as points from Jack Kelly and the attacking duo of King and Kavanagh pushed them out to a 1-8 to 0-1 lead.

Conroy responded with another free but Paddy McCane grabbed his second goal of the championship on 18 minutes to make it 2-9 to 0-2.

The misery continued for Castletown as James Ryan, Brandon McGinley and King all continued the scoring for Rathdowney-Errill as they moved on to 2-14 to 0-4 just before half time.

Castletown did manage two more in first half injury time including a Ryan Mullaney effort from distance but the last say of the half fell to Mark Kavanagh as he landed a free to make it 2-16 to 0-5 at half time.

The second half continued with the same trend and although Castletown pucked the opening score of the half through Brendan Reddin, Rathdowney-Errill kicked on and fired over the next seven scores before the water break including a second goal from James Ryan to leave them 3-22 to 0-7 up with 15 minutes to play.

Mark Kavanagh was on fire all day but he landed three in a row just after the water break, two of which were from play and you would travel a long way to see better.

Dylan Conroy did stop the rot for Castletown with a point but Rathdowney-Errill were now in poll position to reach 30 points which is quite a feat in 60 minutes hurling.

Points from David Poyton and Mark Kavanagh edged them to within one of that target but the honour of the 30th point fell to the impressive Thep Fitzpatrick as they closed the game with a 30 point cushion.